For as long as humans have been breeding horses, we’ve been trying to improve the quality of their offspring. Barrel racers often breed for similar qualities, namely speed and good minds, but how they end up with horses possessing their desired traits is fascinating. For this article, we chatted with several current Equi-Stat ranked leading breeders to find out how they have built their successful programs, what they look for in sires and dams, and how they stamp those qualities on their offspring.

Bendi Dunn and her husband Matt own Dunn Racing. They’ve been breeding horses for 12 years. She says their program is two-pronged, focusing on producing Quarter Horse racehorses for the track, and barrel horses. Ultimately, the goal is marketable horses that can eventually become rodeo mounts.

“If you want to make the horse a rodeo horse one day, I think you have to be prepared to breed some intelligence into it,” Dunn said. “That’s what’s on our goal list. We send our horses to the futurities, then to the derbies as 5- or 6-year-olds, then get them into rider’s hands that can help us get them seasoned at the rodeos, and then we sell them or ride them ourselves, hoping to get them to some of the bigger rodeos eventually.”

Dunn says the end goal, and rider preference, often determines what qualities you breed for.

The Dunns look for speed most of all, but that’s not the only quality they are after. Conformation, temperament and trainability are also at the top of the list. They also like a bit of cow breeding, to add common sense to the mix.

“We like a horse that is fast—we want a horse that’s going to run and we definitely breed for speed,” Dunn said. “We want a mentally strong horse, but we don’t like a really hot horse. We’ll steer away from something that our trainers feel is a hotter-tempered bloodline.”

Dunn doesn’t discriminate when it comes to size. She says a smaller horse can make the horse less marketable to a degree, but she doesn’t worry about it for her program.

“We have horses that are 15 and 16 hands, and one of our best horses is 14.1 hands high,” Dunn said. “Some people don’t want to breed or buy a horse that is small, but I don’t think that just because they are small, that they can’t run.” “You want something with a good foot,” Dunn said. “That’s where it all starts. It goes back to conformation, and we want a horse to be stout.”

Dunn looks for different qualities for the horses going to the track versus the arena. She’s more likely to accept a hot- tempered bloodline for the track.

“I strive for strongly made, durable, smart, agile colts with a want to learn and a willing, curious personality,” Akerstrom said. “I like a prospect with balanced conformation and natural body control early on.”

For her breeding program, Akerstrom avoids a fragile mind, lack of bone and horses that develop late.

Bo Hill and her husband Jeff Switzer have been breeding champions since 1996. Hill says they aim for both physical and temperament traits in their horses.

“We breed for great minds, easy-to-train horses,” Hill said. “We also like a good-looking horse with some size and soundness. We like a fast and athletic horse.”

Traits to be avoided, in Dunn’s case, include fine bones and poor feet.

“We try to listen to successful trainers and avoid pedigrees that are not good- minded or that are difficult to train,” Hill said.

All of these breeders said the key to success lies within the broodmare—75 per- cent of the traits coming from the mare, 25 percent from the stallion. Dunn attributes her program’s success to the strength of the approximately 25 broodmares they have gathered.

“We really believe in the mama,” Dunn said. “You want a mare with good conformation, because those are things that really get passed on.”

Akerstrom says it’s difficult to predict how strongly the mare will pass on her traits, which is why she looks for the most apparent presentation of those traits.

“I have faith in the power of the broodmare and what she has produced in mating to several different stallions,” Akerstrom said. “I like understanding

what certain well-known barrel bloodlines are known for. I ask a lot of questions of the trainers and riders of the mare’s resulting offspring to get a real handle on what the horse is like under saddle and under pressure because I want the next one to be even better.”

Akerstrom looks for own daughters of great stallions that have shown that they
possess the traits their bloodlines are known for. This doesn’t mean a mare has to have a great competition record, but a broodmare retired after a successful career is more exciting for the sake of marketability.

“Seeing the proof is in the pudding,” Akerstrom said. “It doesn’t scare me to breed to a mare that hasn’t actually performed, but a preferred broodmare is one that has shown some sort of exciting attachment to barrel racing; or her natural ability to get out of the gate as a racehorse; or was a consistent barrel horse with talent, that might have gotten hurt. Prospects from winning broodmares give buyers more confidence that they have better odds for success.”

While the mare is crucial, Akerstrom also researches the stallions thoroughly. She prefers to choose a stallion that can handle doing more than one event.

“More and more these days, I like selecting stallions that possess a strong ability to be very versatile,” Akerstrom said. “I respect a stallion that can hold it together mentally and do different things.

I like a stallion that can go rope a calf, go to the breeding shed and then go to a barrel race. A racehorse that will show some expression and watch a cow—I love that.”

Akerstrom also looks at the dam side of the stallion and is a big fan of strong genetic female lineage and what is has to offer. Akerstrom recommends finding a stallion with bloodlines—and the offspring to back it up—that complement your mare.

“I would select a stallion that has a pedigree not only overdosed in traits that she is weaker in, but one that has sired what his lineage says he should,” Akerstrom said.

Hill says they choose a stallion that has dominant traits stamped on foals out of a variety of mares.

Troy Crumrine and Jolene Montgomery ride for the Dunns. Dunn says they choose horses with bloodlines that suit each trainer’s style. The Dunn’s colt breaker Paul Cain knows their trainers’ preferences, and often reports back with his advice on the horse’s temperament and ability.

“He’ll start horses as a 2-year-old and then tell us when he likes one and which of our two trainers he thinks will like it,” Dunn said. “We try to listen to the people that work for us, and keep repeating that cycle.”

Hill trains the horses for Hill and Switzer, and Switzer says he leans heavily on her opinion of the horses as they plan for future breeding decisions.

“We are a team, and we’ve found certain families that she likes and some she didn’t like that weren’t as trainable for our program,” Switzer said. “So I steer clear of those horses, those particular families. I’ve always looked for families that are known for having good minds, that are trainable.”

All of the breeders say that while they breed for what they want, they also acknowledge what bloodlines are currently hot, so they can maximize the

potential for their horses to find a home in the market.

“If A Streak Of Fling is the hot thing on the market, we are probably going to breed to him that year,” Dunn said. “Because we sell horses. That is part of our business. Not that we don’t breed to some of the new upcoming stallions, because we do, but we also try to breed to the ones that are doing well and winning. It just makes the offspring easier to sell.”

Dunn advises breeders to make sure your feeding regimen is top-notch to help your horses reach their potential.

“Your feeding program influences the horse before it’s even born,” Dunn said. “I think it’s so important how you’re feeding your mare or your recip mare.”

She also recommends handling the babies from the beginning, to encourage trainability.

“We want them to be gentle,” Dunn said. “I feel that when you have them gentle, when they get to the colt breaker, they transition better.”

Akerstrom says the offspring of a sire or dam offer valuable clues to their representation of their bloodlines.

“Pay attention to your offspring,” Akerstrom said. “Is the colt a good example of his parentage? I love a well-bred broodmare that produces the same traits and style of movement that her close-up lineage is known for, no matter what she is bred to.”

Switzer advices to learn which horses have the top traits you’re looking for, and cross those bloodlines.

“I would suggest finding something that is trainable, and finding mares that are good producers,” Switzer said. “This is not an easy business, and it’s not for the faint of heart. You will have to endure some tough times, but when you find that magic cross, it’s like there’s nothing to it.” 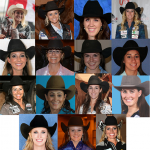 In the Mix at the NFR

But I’m Not THAT Barrel Racer… 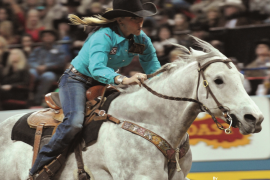