Windpuffs are soft, fluid-filled enlargements on the sides of the fetlock joint toward the rear. These swellings may range from longstanding symptomless blemishes with no soreness or lameness to a more serious condition due to recent injury in which the horse is obviously lame.

“The first question we generally ask is whether the horse has a windpuff or is simply stocking up,” McClure says. “Some horses have swelling (edema) in the lower legs from standing around overnight, especially after exertion, and this can look a little like a windpuff.”

The stocked up leg occurs due to poor circulation; generally after the horse exercises and moves around, this swelling disappears.

“A windpuff is fluid in the tendon sheath and doesn’t disappear, whereas the horse that stocks up has diffused edema in the lower leg that is temporary. The other common cause of swelling would be fluid in the joint rather than the tendon sheath. In this situation the filling or swelling is in front of the suspensory ligament and around the front of the joint rather than toward the rear,” he says.

Gary Baxter, VMD, MS, Hospital Director at the University of Georgia in Athens, Georgia, says there is often confusion regarding windpuffs. Some people think they are swellings in the joint capsule,
but the most common definition of a windpuff is a stretched tendon sheath—where the digital flexor sheath covers the two tendons that go around the back of the fetlock.

Tendons, especially where they glide over hard surfaces, are lubricated to prevent friction that might interfere with smooth movement. The tendon is encased in a hose-like sheath, which contains a small amount of lubricating fluid. This sheath has a synovial lining, just like a joint. If there’s swelling in this area, it generally means the sheath or something within the sheath has been stretched or injured and has created extra fluid. The sheath bulges because the “container” is stretched, and adequate lubrication can only be maintained if the enlarged pocket remains filled with fluid.

Although it may vary in size from time to time, this area may be permanently stretched and the swelling may never completely disappear. Many horses have windpuffs, especially on the hind legs.

Most windpuffs don’t cause pain. They are simply extra fluid, creating a soft enlargement.

“If there is any heat, pain or lameness associated with the swelling, there is something pathologic that needs to be addressed,” McClure says.

Windpuffs may be caused by an acute insult or trauma and the tendon sheath is stretched, allowing for extra accumulation of fluid, but the horse is no longer lame.

“Those swellings are generally not a problem,” McClure says. “But if there are signs of heat, pain or lameness or the horse reacts positive to a flexion test, this indicates inflammation and damage to the tendon sheath.”

You need a diagnosis to know how best to treat this condition.

If the swelling popped up suddenly, however, this would be something to check, especially if both legs were the same and then one becomes more puffy than the other.

“If they are not symmetrical, such as a little fluid in one but the other is much larger, this usually means there is a problem, such as an acute injury in that leg,” Baxter says.

If a horse has chronic windpuffs, it is important for owners to notice whether one becomes obviously larger.

“That’s when they need to be concerned about it, rather than disregard it as just an old windpuff,” Baxter says. “There can also be increased fluid in one side versus the other without  obvious lameness. Not having lameness, however, does not necessarily mean there is not active inflammation and potential injury in the one that’s more swollen.”

In such cases, Baxter advises having a veterinarian check the leg.

“We may find injuries to the superficial or deep digital flexor tendon,” he says. “With better diagnostics we have become better at finding these lesions, either with ultrasound or the arthroscope, or an MRI. We can find things within the tendon sheath that may contribute to the excessive fluid and explain why there is more fluid in that one.”

McClure says conformation and chronic conditions may play a role.

“We sometimes see windpuffs in horses that have a chronic tendon problem, with the fetlock joints dropping down toward the ground,” McClure says. “This can be due to degeneration and chronic flexor tendon issues. Horses that tend to drop down too far in the ankles when placing weight on the leg may stretch the tendon sheaths, leading to windpuffs.

“They may not be lame at first, but this is an early sign something worse is going on. On further examination you may discover some degeneration of the suspensory ligament and flexor tendons,” McClure explains, adding this is a more serious problem.

By contrast, many athletic horses end up with windpuffs just from strain and stress, but resulting in no serious damage. In these cases the enlargements are just blemishes.

“Even though the horse isn’t lame, just the fact the windpuffs are there is an indication that at some point there was excessive strain,” McClure says. “It should be watched and monitored. Today it might be just a little synovial effusion, but on down the road it might progress into more severe synovitis, tendon disease or annular ligament disease.

“If a horse has windpuffs, have the area examined with ultrasound, to look at the superficial and the deep digital flexor tendon, annular ligament, suspensory ligament, etcetera,” McClure says. “With ultrasound you can get a better idea if there is something seriously wrong.”

The Rest of the Run 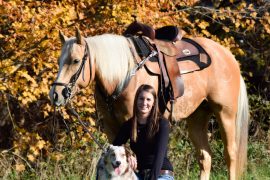