Triangle Horse Sales and Future Fortunes teamed up for the second year to award a $20,000 total payout to horses eligible for the John Read Foster Challenge sale incentive. Those eligible include barrel-bred yearlings sold in the annual Triangle Fall Barrel Classic Sale, and this year’s incentive recipients were derived from yearlings sold in the 2017 sale.

First- and second-place sale graduates were awarded after performing in the 2019 Barrel Futurities of America Juvenile Futurity at the Lazy E Arena in Guthrie, Oklahoma, from November 18–23. The award was determined on a two-run average with sale graduates competing only against each other for the John Read Foster Challenge payout.

The annual John Read Foster purse is sponsored by Triangle Sales, which has featured performance horse sales for more than 40 years, along with Future Fortunes, a leading barrel horse stallion incentive program. The two entities established the incentive to provide the barrel industry with a venue for successfully marketing yearlings. The goal for the bonus payment to 3-year-olds has been to help stimulate production by rewarding young prospects.

The challenge champion and winner of $12,500 is VR Bugsinthewind (Furyofthewind x VR The Last Bug by Shawnee Bug), ridden and owned by Rylee Shields of Cochran, Alberta, Canada, which sold as Hip No. 501 consigned to the 2017 Triangle Fall Barrel Classic Sale by Leah Rogers of Ventana Ranch in Noble, Oklahoma.

“I won a lot of money on a Furyofthewind-bred horse out of a Pie In The Sky mare, so I was buying for his breeding,” Shields said. “I was concerned about him being mature enough to make this trip— but he’s fun and hopefully he will keep getting faster, and this was a great bonus.”

Shields says she made the purchase of “Bug” with the incentive in mind.

“I was aware of the John Read Foster incentive but wasn’t really familiar with it at first,” Shields said. “After I read about the specifics, I recognized it as a great bonus. There are a lot of incentive programs out there, but this is among the biggest pay outs.”

Reserve champion and recipient of $7,500 is Maximum Midnite Fame (Frenchmans Maximum x Destiny Ta Fame by Dash Ta Fame) owned by Ryan and Alicia Kirkpatrick and ridden by Michelle Noterman of Purcell, Oklahoma. “Gopher” was consigned as Hip No. 515 in the Fall 2017 Triangle Sale by Tommy Bradbury of Kentucky.

“Michelle told me about him, and I am so tickled with him,” Alicia Kirkpatrick said. “I am not necessarily a futurity person, so when Michelle suggested this horse and that she would run him, it was a new thing for me. We wanted to go for the John Read Foster money, so winning the reserve championship was a fun thing for myself and my family. Hopefully, he will work for my daughter someday.”

Alicia is already looking toward the next opportunity.

“And, I just purchased another John Read Foster incentive-eligible horse in the last Triangle Fall Sale,” she added. “Maybe we can do it again.”

Bits of Success with Stevi Hillman 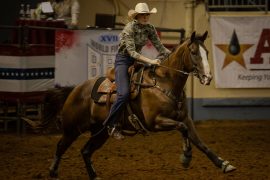 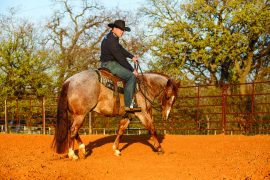 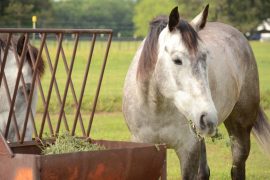 Cubes, Bales or Both?