–Old Fort Days Futurity to Officially Change the May 16 Final Round to 1 p.m.-

World Champions Rodeo Alliance is proud to announce they have aligned with the Old Fort Days Futurity and Derby. The WCRA and Old Fort Days also announced that with the alignment of the two organizations, the futurity will officially change their May 16 final round to 1 p.m. to make it possible for athletes to compete in the WCRA Stampede at The E, a one-day, $1 million major rodeo May 16 in Guthrie, Oklahoma, at the Lazy E Arena.

“Having two organizations work together like this to directly benefit rodeo athletes is the definition of being all for rodeo,” WCRA President Bobby Mote said. “The alliance between the two events will give barrel racers the chance to run at both events, and more importantly, reward athletes who are consistently doing their job while competing at these events.”

The five-day OFD Futurity and Super Derby in Fort Smith, Arkansas, at Kay Rodger Park offers an estimated $230,000 total purse and includes more than $60,000 added money and $35,000 Future Fortunes bonus money. The collaboration between the two organizations will give barrel racers the chance to nominate their efforts and earn competition and consolation points.

The Old Fort Days Futurity and Super Derby is glad to make this adjustment to the final-round start time so their contestants can be a part of the WCRA Stampede at the Lazy E Arena.

The Stampede at the E, dubbed the Richest Rodeo in Oklahoma, is a one-day $1 million major that will host athletes from around the globe, competing for their share of $1 million. It will be nationally televised on the CBS Television Network.

Qualifying for WCRA events is based purely on performance and on series points, rather than dollars won, through the Virtual Rodeo Qualifier. For athletes interested in learning more about the WCRA and the VRQ, or an event producer interested in aligning with the WCRA platform and the new expanded points initiative, please visit wcrarodeo.com or call 833-368-3787. 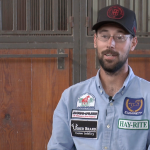 Get to Know Brandon Cullins