Before “Sister” was a $1 million earner, Hailey Kinsel had her fair share of frustrations training the mare. We talked with Hailey about how she pushed through the trying times and brought to light Sister’s unrivaled talent.

Did you think Sister was going to be this special when you got her as a 2-year-old?

“She was always going to be special to us. We didn’t know if that was as a 1D, 2D, 4D barrel horse, a heel horse or ranch horse. She had a good personality, a kind eye and meant a lot to us. She did honestly have a superstar feel, but you never know until you start running. She is lazy as all get out. She didn’t act like she wanted to run, which is polar opposite of what she is in a run, but on the day-to-day she is still lazy. I never thought I’d have a horse that would clock in such a dominant way.”

What was the most challenging part about training Sister?

“Her stiffness has always been a factor we had to work with. We realized early on it was not going to go well, because she’s hardheaded. She’s a straight-bodied horse with a strong front end and strong back end that feels completely separate. There’s not much you can do to soften up this horse.”

How did you work around that?

“I trained some horses with my mom (Leslie Kinsel) in the past, and they were pretty orthodox—soften up their sides, bring their nose around and it’s a nice, round-bodied turn. Sis was not that, and there was no way she was going to be that. Softening her was going to be an everyday thing, and I realized for the rest of her life I will work on softening her sides. I cannot nitpick at her and demand she turn into this round-bodied horse she’s not meant to be. Mom and I agreed in her 3-year-old year that we are going to work on the softness of her sides and face, but when she runs, we are not going to stress about how her body is shaped as long as she’s being correct.”

—>Read more: Click here to learn about the bit Hailey runs Sister in<—

How did Sis change once you adapted to her style?

“Since we’ve let her have her own style, she’s always been respectful of your inside leg and hand when you do things correctly. Us realizing early on was the hard part, but it’s also been an advantage so we didn’t get in fights with her. Part of what’s made her so dirty fast is her stiffness.”

Did you talk to anyone for advice?

“My mom and I have done everything. I studied the heck out of ‘Stingray’ (MP Meter My Hay) and ‘Dinero’ (PC Frenchmans Hayday), because if that’s the way they’re built to work, they’re going to work like their family. [Sherry Cervi] was the example I followed of how to make a stiff horse a correct-turning horse.”

Was there a rock-bottom point?

“Her 3-year-old year was fun—light, relaxed, not going fast. The hardest point ever when I felt like giving up was at the 2015 Barrel Futurities of America World Championship her 4-year-old year. It was the second time I’d entered her and my first futurity of any kind. It was awful, oh my gosh, just terrible. She turned the first barrel kind of, and then halfway turned the second barrel and straightened her neck and wanted to take off toward the alley. I had to pull up in my first round of the BFA. I was embarrassed and thinking if there’s any trainers watching they’re going to think I’m an idiot. Of course, nobody knew the horse or me so it didn’t matter.”

How did you get past the BFA run?

“Nisa Berry is one of my good friends, and she helped me work through it mentally and recognize that it is OK to screw up, especially your first time, so don’t get too worked up. She helped me get a different bit for the second round, and Sis clocked great just loping through. It was two days of frustration, but it ended well. I still felt like I let myself down, but after that she was a 1D horse. That would be my most trying time, because I expected her to work OK and she worked absolutely terrible, and I was embarrassed. After that, she really did say, ‘OK, what do you want me to do?’” 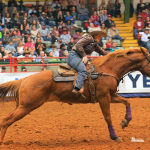 Between the Reins with Hell On The Red