“It’s the greatest rodeo in the world,” said the 47-year-old announcer from Perry, Oklahoma. “This rodeo touches every association across the board. For many, this is the start of their rodeo career in multiple associations.”

His daughter, Kendalyn Stueve, has been competing here for two years.

“I compete in barrels,” the 16-year-old said. “I’ve been coming with my dad every year. I have met so many people and am running against the best.”

Kendalyn started competing when she was 3 years old. She and her horse, “Flicka,” made the Better Barrel Races World Finals that year. She kept going, entering the junior rodeos and competing in junior high and has made the top 15 in the American Cowboys Rodeo Association the last two years. Monty has announced those finals nine times.

“Wherever he goes, I go,” Kendalyn said.

Monty has been an announcer for 20 years.

“A guy called me on a Wednesday night and asked if I was coming to his rodeo—he needed an announcer,” Monty said.

“I’ve done every event in the sport of rodeo,” Monty said.

Monty served for 10 years in the Army as a supply specialist, rodeoing for them in Europe as well as the United States.

He announces for the Hampton Rodeo Company, the main stock contractor at the IFYR and the 20-time Stock Contractor of the Year in the IPRA. He travels as far as Illinois to announce rodeos, making the 660-mile trip in his Chevrolet truck and Cimarron trailer, their home away from home. His wife, Sheila Stueve, is a surgical nurse and trains all of Kendalyn’s horses. Sheila and Monty’s son, Cooper, took a different path and chose baseball over rodeo.

“I never pushed my kids to rodeo—it’s their choice what they do,” Monty said. “He can ride and rope, but never competed.”

The Stueves raise cattle on their 80 acres outside Perry, Oklahoma.

The father-daughter duo travel every weekend together along with their trusted dog, Yankie, a Jack Russell-Rat Terrier mix.

“How many people get to travel with their family every weekend?” Monty said. “Momma gets to go too—she’s the peace keeper.”

Having her dad in the announcer’s booth is a unique perspective for Kendalyn.

“She keeps everything running,” said Kendalyn. “I like traveling with my dad. I get to enter some of the toughest rodeos out there and he gets to announce me—and he never gets my name wrong.”

Kenzie Cook Wins IFYR Round One 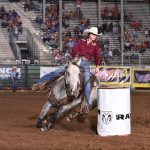