Tammy Fischer is a household name in professional rodeo. The seven-time Wrangler National Finals Rodeo qualifier won just about everywhere she went in the early to mid 2000s, most notably aboard her famous bay gelding Easy Dash Oak (“Roundpen”) and MP Quick Money (“Money”). She finished as high as third in the world standings in 2002 after winning five out of 10 rounds at the NFR on Roundpen.

Fischer will run again under the bright lights of Vegas in 2018 for the first time since her last qualification in 2011. This year, she enters the Finals ranked No. 10 in the world with $91,277 in season earnings. She can thank a small but mighty palomino mare for securing her place in the top 15 of the Women’s Professional Rodeo Association.

“She’s gritty; she’s little—barely 15 hands,” Fischer said of her 8-year-old mare LK Sheza Hayday, by Money’s sire PC Frenchmans Hayday and out of Sheza Peasa Pie by Pie In The Sky. “Most of the other horses tower over her. She is beautiful—everybody’s always like, ‘Oh my gosh, she’s so pretty.’ Sometimes I wish she wasn’t so pretty, because everybody gets hung up on her looks.”

“Ziva” isn’t just a pretty face. In only her second year of rodeoing, the mare pulled through a tough summer run without batting an eye.

“I chose probably not the easiest path over the Fourth of July, but I picked the rodeos for us that paid the most money,” said Fischer, who emerged as barrel racing’s high-money winner over the “Cowboy Christmas” run with $29,133. “I picked a drive that was unbelievable that most people would not pick, and she just got stronger the whole time. We had three days of all-night and all-day drives; no rest. We were never parked anywhere for more than three hours.”

The record-setting, barn-burning horses may garner the most attention, but sometimes that doesn’t translate to the grueling pace of professional rodeo. Fischer says Ziva performed better when conditions got worse—the trademark of a true rodeo horse.

“When most horses would want to quit, she got faster every single trip. That says a lot, because everybody thinks you have to have the fastest horse. You can go to the jackpot and buy the fastest horse, but that doesn’t mean they’re going to make the best rodeo horse,” Fischer said. “They have to take the elements, they have to be able to haul, eat and drink on the road, they have to unload and run, take the big, the little, the cold, the hot, all the different things, and she does. It doesn’t matter if we get there two hours before or five minutes before, you can trot two circles and run her and she’s the same. It’s what you look for.”

A summer away from home was hard on Fischer, too. She rodeoed enough last year to help her hauling partner, 2017 Rookie of the Year Taci Bettis, qualify for her first NFR. By mid-August 2017, Fischer was 17th in the world and made the decision to come home to Giddings, Texas. Fischer says that as she’s grown older, time with her family is increasingly more important than chasing the rodeo trail.

“When I lost Riley nine years ago, family became more important,” Fischer said of losing her son, Riley Key, tragically in a car accident in 2009. “[In 2017], I felt like I had pushed my horse enough—it was her first year on the road. With age, I didn’t feel like I had anything to prove. I felt like I had succeeded. My goal was to go out there and win enough to get into the limited rodeos, so I had really over-succeeded my goals. I came home and felt good about it.”

This year, the script flipped and family became the reason Fischer stayed out on the road a little longer.

“When it came time for school to start, my husband (Brian Fischer) and my child (Sydney Fischer) came home, and this time I was 14th in the world,” Fischer said. “I quit entering for three days and said ‘I’m coming home.’ And my family voted, and they voted no. Taci was qualified and my daughter was qualified for the Junior NFR, and I have a 16-year-old girl who I help, and she’s qualified for the Junior NFR. So in the terms of my 8-year-old daughter, I’m the only loser in the trailer. I’m the only one not going to Vegas. So, Mom, get with it!”

Fischer missed some big rodeos in the three days she didn’t enter. Using the insight one only gains from being a veteran of pro rodeo, she entered strategically elsewhere.

“In those three days, I missed the books and didn’t enter Ellensburg (Washington) or Kennewick (Washington). I missed the two biggest rodeos in the Northwest and had to change my strategy,” Fischer said. “I don’t know if it’s age or wisdom, or just consider it a hit barrel at those two rodeos and go on. Everyone’s like “Oh my gosh, you missed the two biggest rodeos out here,” but no, I didn’t. Whichever two rodeos I choose to go to are going to be the two best out here, because those are the two I’m going to win at. Just change your outlook—have a positive outlook and go on with it.”

There’s no doubt Ziva has proven herself as a rodeo mount. However, Fischer does face a challenge in the small, confined walls of the 13-second pattern at the Thomas and Mack Center arena.

“She just won’t run in a building,” Fischer said with a laugh. “She loves the outside—you take the walls away and she’s a superstar. Now the challenge is figuring out how to get her to run in walls. She will make a beautiful pattern, but she just checks off. We’ve got to find the speed in the walls by December. With age comes that wisdom, and she’s getting stronger all the time. I can’t say that she’s not good in a building because I won a lot at Nampa (Idaho), and that’s a building. I will not take her outside again before [the NFR]. I’m going to put her in the walls and keep her there and get her used to them.”

As any NFR qualifier knows, ending the year in Vegas can’t happen without a troop of supporters along the way.

“I had the best year ever as far as my horse. I had the worst year ever as far as mechanics and rigs,” Fischer said. “I ruined two axles at two different times. When I left in June until I got home in September, I only had my own rig for two weeks. I couldn’t even give you the list of people I need to thank. I have so many friends it’s unbelievable, who gave me rides, got me places, loaned me trucks and trailers and rigs and places to sleep and leave my colts because I could only haul one horse—it’s just unbelievable. My husband took off three weeks from work to bring me rigs and bring our child home and keep her in school and keep everything floating at home while I stayed in the Northwest. He listened to me cry on the phone when everything fell to hell, and getting mechanics on the phone to make it happen. It’s amazing to have that kind of support. I would also like to thank my sponsors, because without sponsors you cannot make it.” 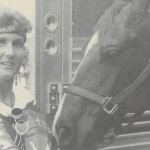