Last year, 96 events paid $2.4 million. This is a 25 percent increase in the number of events recorded, but only a 17 percent increase in purse.
Six events, or 5 percent, paid out more than $100,000. These top-tier events include the Barrel Futurities of America World Championships, Old Fort Days, the inaugural Lance Graves Pro Classic, Run for the Bucks and the Silver and Gold Cups. Half of the futurities, 64 events, paid less than $7,500, while 60 percent, 77 events, paid less than $10,000.

The richest event was the BFA World Championship Futurity, held in December at Oklahoma City, with $517,461. It had the greatest increase in total purse, $248,040. Of that increase, $220,000 is from the inclusion of the Super Stakes, a one-run, 3-year-old slot futurity that replaced and revamped the Pro Tour Futurity, produced by John Wainescott. The remaining $28,040 was from an increase in the Juvenile Futurity payout. The 4-year-old Futurity dropped by a scant $2,397, while the Juvenile increased dramatically with $30,437.

The Best of Both Worlds 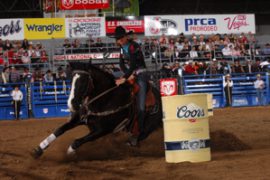 Where Credit is Due – WPRA Montana Circuit Keeping Stats