Riding and guiding two-handed into the turns.

I see a lot of people at my clinics who have developed the habit of riding one-handed and trying to primarily use their inside rein when running barrels. Instead of working on guiding on the approach to the barrels with two hands and keeping their horses framed up, I think people who rely heavily on the inside rein end up with horses that are overly bent, which can cause problems like hitting barrels, horses turning on their front ends, floating their hind ends out and not finishing the turns.

I recently returned from teaching a series of clinics in Australia, and it was interesting because most of the riders in Australia learned to ride two-handed. You don’t see a lot of downed barrels with that style of riding, but there are some Australian barrel racers who have switched to riding totally one-handed because, as they explained to me, they’ve observed different American barrel racers ride that way. The contrast in styles gave me a good opportunity to explain a distinction between how I ride and teach compared to what a lot of other people do.

What works for me and what I teach is to not rely entirely on the inside rein in training or competition. If I were to navigate the approach to the turns with only the use of my inside rein, it wouldn’t be possible for me to guide the horse’s hind end up and around the barrels to what I refer to as axis point No. 3 on the backside of each barrel. What happens instead with using all inside rein is the horse’s front end goes in, its hip goes out and you see a lot of front-endy horses and knocked barrels.

I ride a perfect circle to make all the axis points around the barrel. To do so, I need to ride two-handed to frame my horses up and get them to engage their hindquarters. I have the greatest success when I ride two-handed, and after making my axis points, going to one hand to finish each turn.

If the shoulders and head are out of alignment, chances are the horse’s nose is bent in too much, the shoulder is dropped in or fading out. If that’s the case, adjust those imaginary arrows using two hands on the reins to line the head and shoulders back up.

By being aware of your horse’s body position, you can learn to aim the shoulders to each of the axis points around the barrels. When you’re guiding the front end correctly, the horse can keep its inside hind leg engaged and underneath its body.

People often don’t know how much bend is too much, so instead, teaching riders to aim the shoulders and head to the axis points with two hands and to ride the horse’s hind end while urging the horse forward into the bridle helps me teach collection.

What is Too Much?
You may be wondering how to tell how much is too much inside rein, because you do need the inside rein to maintain slight bend and arc in the horse’s body. And vice versa, how much outside rein is too much? If you use too much outside rein, you will simply not get enough bend. Guiding your horse’s body properly requires an awareness of what your hands and feet are doing at all times to help your horse.

If you find yourself looking to the inside of the target and using your inside rein alone, chances are you’ll also find yourself hitting barrels, losing momentum or bowing off the turns.

Letting the horse’s shoulder float out and pulling the nose around with all inside rein only causes the hip to float out. When a horse’s hindquarters are not engaged for the turn, the horse has few options but to turn on its front end, which is a slower, choppier turn that is a lot harder for the horse. That’s one reason I believe using one rein is not usually sufficient for aiming your horse at the target positions.

Another thing I tell people to help them learn how to position their horse’s body is to point the horse’s head and neck toward each axis point like they are pointing the barrel of a gun at a target. Precision is definitely required in barrel racing, and training yourself to be a precise rider is a must in order to continually improve and be the best you can be. Some horses need tighter position around the barrels and some need more room, so it’s the rider’s job to learn what each horse needs to make the best run.

That being said, there are some people I’ve watched over the years that riding one-handed works great for. Kelly Kaminski’s horse Rocky had a style of turning that worked great one-handed. Lisa Lockhart is a great one-handed rider. She is very precise about every cue and movement so her horses are totally in tune with her. I also notice that in situations which require her to adjust her hands, Lisa absolutely does so to get her horses in correct position to run in between and make each point on their path around the barrels.

Sometimes you get lucky and things work out in your favor during a run, but odds are always better when you train yourself to ride precisely to each target point on the pattern.

This article was originally published in the April 2018 issue of BHN. 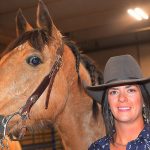