Arena footing should be a mixture of sand and clay, with a small amount of silt. Jim says this mixture creates a variety of particle sizes and angularities that create structural support.

“A lot of people have too much of the same size sand, and it’s like sticking your hand in an aquarium filled with marbles,” Brown said. “Your hand will go right to the bottom. If you filled that aquarium with different size balls, such as grapefruits and softballs and Ping-Pong balls, the differences in size lock up to give structural support. In an arena, different sizes of sand does the same thing, and the clay holds those particles of sand together like a glue to give that needed impact without breaking a bone.”

With so much weighing on the composition of your footing, it’s wise to get your dirt analyzed by a company specializing in arenas such as Environmental Technical Services, a lab with equestrian experience, before you make any decisions. You also need to have your ground tested regularly because the particles will degrade with use or exposure to the elements and losses due to erosion or migration.

“Your sand wears out into smaller particles because hooves are hitting them,” Brown said. “You have to test it on a regular basis to make sure that you’re not falling into one particle size, like all fine size. It’s very important to have the right percentages, and those percentages vary with different disciplines.”

The biggest difference between barrel ground and other event footing is the need to eliminate a hard pan below the soft upper layer.

Brown says in general for barrel racing, he looks for an arena to contain a variety of coarse, medium and fine sands that make up 75 to 80 percent of the ground composition. An additional 15 to 20 percent of the composition should be clay, and the remaining percentage is silt. Brown says people often mistake silt for clay, but silt does not absorb as much water, so it can cause slippage sooner than clay. Clay is moldable, a property that is referred to as plasticity, while silt particles are a completely different mineralogy and are particles which do not exhibit plasticity.

“Barrel racers need a bit more clay than other disciplines because they’re going a lot harder into turns than say, ropers,” Brown said. “The competitors in barrels need to be able to cup and launch.”

Brown works with SAF and equestrian facilities to test the footing and adjust its properties as needed, offering recommendations on where to purchase sand or clay and calculating how much is needed. Brown has used the services of Michael DePew, an agronomist and soil scientist, with Environmental Technical Services (ETS) with his work both with Tex-Sand and for SAF.

“We have worked with ETS in evaluating various arenas and other equestrian footing applications such that SAF and ETS have established a database of various ground properties from venues considered ‘good’ and ‘bad.’” Brown said. “We have been able to apply this information to help improve footing conditions for many arenas. By going in and evaluating the material properties of the soil, we can then devise the type of materials and the proportions needed to modify and improve the footing conditions without having to resort to the expense of bringing in a whole new soil. In some cases we also have to look at other additives to help manage sodium or carbonates, which may be present in the ground and which can impact the performance of the cushion.”

George McDermott, an equestrian footing consultant and member of SAF, says the ground composition is the most important part of the arena care equation.

Whoa! Do You Know If Your Product Adds Up?

The Lost Art – Seeing the Signs 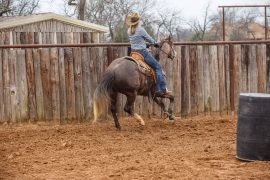