Linda Vick and AR Will He Tell.

The 2011 Ram California Circuit Finals Rodeo was held October 14-16 at the Antelope Valley Fairgrounds in Lancaster, California. Defending champion and veteran competitor, Linda Vick, from Hesparia, California, proved that she’s still got what it takes to win. Edging out Ann Scott by six hundredths of a second, Vick captured the average title for the second consecutive year. NFR qualifier Christina Richman finished the season as California Circuit champion with $33,282.18, while Vick took the reserve title banking $21,963.02 for the year.

Aboard AR Will He Tell, a.k.a. “Will,” Vick was the second barrel racer through the gate on Friday night. She won the round with a time of 17.63 seconds on a standard pattern, outrunning Rachel Myllymaki by a full tenth. Vick made another clean run in the second round, but didn’t place due to what she called a “pilot error,” riding her horse slightly past the second barrel.

Christina Richman finished the season as California Circuit champion with $33,282.18.

Going into the third round, Vick was second in the average behind Myllymaki. In the first two rounds, Vick had run from the gate, which was set slightly off-center with a short score.  “Most of the other girls had been going in and setting up. I was fighting with myself, trying to decide what to do,” she explained. She ultimately decided to listen to her horse; when he walked in quietly, she set him up and let him roll. Will ran strong and worked well, stopping the clock in 17.50 seconds to split first place in the third round with Scott. When Myllymaki hit a barrel, Vick reclaimed the average title, taking home $2,287.93 and a trophy buckle for the three days of work.

A WPRA Gold Card member and versatile horsewoman, Vick spent years galloping racehorses and training futurity horses. Now retired, she trains her own horses. She purchased Will, a 2004 model sired by Especial (Doc Bar x War Leos Lady by War Leo) and out of JW Dixie Chick (Badger Safari x Su Su Ling by Sparking Cash) sight-unseen as a 3 year old. After having him started for two months under another trainer, she finally laid eyes on him for the first time.

Vick started and trained Will on the barrel pattern, and describes the 14.3 gelding as a ratey horse that gets in the ground and hunts the barrels. She also trained his hauling partner, KK Tulsa Express.

Linda Vick finished second in the circuit with season earnings of $21,963.02.

“I’m pretty fortunate right now, to have two good young horses. I’m still healthy. My husband, Joe, does all the driving. It’s teamwork,” she says. Vick, who is 64 years young, still holds her own as a professional barrel racer, peaking as high as 17th in the Women’s Professional Rodeo Association world standings and this year finishing 32nd.

Vick praised the 2011 Ram California Circuit Finals Rodeo committee, commending them for organizing an exceptional finals rodeo at the last minute and for maintaining safe, firm ground to compete on. “The ground was better than most rodeo ground,” she added. “They’d run 12 of us, didn’t [hand] rake [in between], and the ground held for everybody. It was just as good for me when I was 11th out as when I was second out.”

For more information on the 2011 Ram California Circuit Finals Rodeo, visit cafinalsrodeo.com. Official results can be found at wpra.com.

Unlocking the Mysteries of the “Undiagnosables” 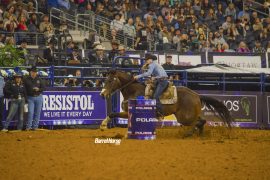