JUNE 9, 2019, CASPER, WYOMING — The 71st edition of the College National Finals Rodeo kicked off Sunday afternoon with the Bulls Broncs and Breakaway competition.

One of the early leaders in breakaway roping is a second-generation cowgirl who comes from a rodeo family. Quincy Segelke grew up in Brush, Colorado, and is attending Chadron State College. She has two older sisters who have both competed at the CNFR in the Casper Events Center. Her mother, Vickie (McIntyre) Segelke, competed at the CNFR before it moved to Casper, Wyoming, where it has been held the past 21 years.

Segelke is also a student director on the National Intercollegiate Rodeo Association’s board of directors representing the Central Rocky Mountain Region. She tied for first place Sunday afternoon with Taylor Munsell of Northwestern Oklahoma State University with 2.1-second runs.

Munsell is at the CNFR for the second time and just finished her sophomore year of college. Segelke is one year ahead of her in both categories with three qualifications and just one year of college left to obtain a bachelor’s degree.

When he nodded his head Sunday, he finished first in the round with a 79.5-point ride. Ames grew up at Big Piney, Wyoming, and is studying construction management. The winner in saddle bronc riding Cooper Thatcher of Panhandle State University put up an 82-point effort.

There was a tie in the bull riding with two students from Texas colleges. Colten Fritzlan who competes in the Southwest Region for Western Texas College and Daylon Swearingen from Panola College in the Southern Region each scored 82 points. If the rest of the competition goes like the first round, with 14 qualified rides, the bull riding is going to be great this year.

The following are results from Bulls Broncs and Breakaway at the College National Finals Rodeo on June 9, 2019, courtesy of the National Intercollegiate Rodeo Association. Complete results are available at www.collegerodeo.com. 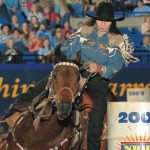 If the Saddle Fits, Then Go Win With It 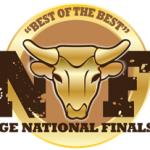 Beisel Bounces Back: Emily Beisel and Namgis D 33 Win Round Four of the Wrangler NFR

Mo Money: Wenda Johnson and Steal Money Win Round One of Wrangler NFR