Winning an average is a feat Taylor Shields says she hasn’t had much luck with in the past, until now. Aboard her 5-year-old futurity horse Furys Princess, the 22-year-old topped the lucrative Canadian Barrel Futurities Yellow Rose Futurity for $2,180.

“She’s the first horse I’ve been able to win an average on,” the Cochrane, Alberta, Canada, resident said. “Every time there’s an average, I always hit a barrel.”

“The first day we did the warm-up jackpot because she’s young and we wanted her to feel it out—more for my confidence, because I think she’s got it figured out more than I do,” Taylor admitted. “The first round didn’t go as good, but as the weekend went on she got a lot braver and a lot faster, and I was just there for the ride. As long as I rode her right, she knew her job and went and worked for me.”

The Shields took it slow with Furys Princess, who they initially bought for Taylor’s younger sister, Rylee Shields. Taylor admits she doesn’t typically care for mares, but something clicked between the two.

“We got her in February of 2018, so it hasn’t been too long we’ve been together,” Taylor said. “My sister had a real good Furyofthewind, so we wanted another one. I usually don’t get along with mares, but we ran out of time when Rylee was supposed to ride her, so I got her. She’s wanted to work from Day One. It just took longer since we started her slower, which is why we futuritied her as a 5-year-old, but she’s starting to come on strong now.”

The mare has a unique style that helps her excel in a variety of setups.

Furys Princess’ adaptability should translate well to the rodeo world. The Canadian futurity season is over for the Shields, so Taylor plans to season the mare at some rodeos before heading south to the U.S. for the big end-of-season futurities.

“We went to the last futurity here for now in Nanton (Alberta) and finished third in the average there,” Taylor said. “We weren’t going to rodeo this year at all, but then Rylee got the rodeo bug and we entered a few rodeos. We’re just picking some good pens to try to season her. Then we’re heading down to the Pink Buckle in October and hopefully the Lazy E again for the Barrel Futurities of America World Championship Futurity in Guthrie (Oklahoma).”

What it Takes to Win with Cheyenne Lindsey 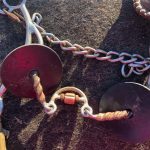 Bits of Success with Audra Masterson: Dave Elliott Spur Up 02

Beisel Bounces Back: Emily Beisel and Namgis D 33 Win Round Four of the Wrangler NFR

Mo Money: Wenda Johnson and Steal Money Win Round One of Wrangler NFR