Kara Large was a little disappointed when she left the DOXA Extreme Barrel Race. She and her horse Credit To Fiesta hadn’t clocked how she’d hoped they would, but a phone call quickly changed her mood.

“I’d left the barrel race and was almost all the way home when someone called me up and said I won it,” Large said. “I thought there was no way I could have because we’d had an off weekend, but we did.”

Contestants entered in the Open 4D had the option of rolling their time over to the Open slot race. As Credit To Fiesta had been working well, Large thought she’d take her chances. With 100 percent payback in the slot race, her time of 16.592 landed in the top spot and earned $1,500.

“He didn’t do anything bad, he was just a little strong and pulled on me a bit in the first run,” Large said of her first run of the weekend. “In the second run, I thought we’d slow it down and get it under control, which is what we did, so it wasn’t our fastest run, but it was good enough.”

Large is happy that Credit To Fiesta, who has taken her to the Women’s Professional Rodeo Association Prairie Circuit Finals, was able to run at all.

“He had a life-[threatening] injury and we’re just bringing him back,” Large said. “I’ve only run him a handful of times.”

The injury occurred when Credit To Fiesta was out in the pasture at Large’s home in Bromide, Oklahoma. An unknown object went through his sole, punctured his tendon sheath and chipped the back of the navicular bone.

“He was very crippled for a very long time,” Large said. “It was a good two years that he was off, and we started running him again in May.”

The time spent recuperating didn’t slow Credit To Fiesta down. His first two runs back were in the 2D, but since then he’s only had two that weren’t in the 1D.

“He’s surpassed any expectations. He’s proven a lot of vets wrong and is a miracle,” Large said. “We’re keeping him forever.”

Large trains horses for her dad, Rick Large of RSL Enterprises, who owns a number of futurity horses. She also goes to pro rodeos. Having a horse like Credit To Fiesta when working futurity horses is a boon to her program.

“It is nice to have an older, solid horse to go back to, because it’s easy to get caught up with training colts,” Large said. “Sometimes you need to go back to something solid to remind yourself of what you want it to feel like, because colts are humbling.”

For additional stories on the DOXA Futurity and Open winners, be sure to pick up the November 2018 issue of Barrel Horse News. 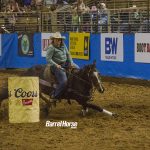