A hotly contested race in the barrel racing continued Saturday night in the Triple Crown of Rodeo final round of three. Fresh off her third trip to Vegas for the Wrangler National Finals Rodeo, renowned futurity trainer Kassie Mowry of Dublin, Texas, EquiStat’s all-time highest-earning barrel racer with more than $5.2 million in lifetime earnings, navigated the course with ease on her 2015 gelding CP He Will Be Epic (Epic Leader x Percilla x Dash Ta Fame) and ran the fastest time of the week in 13.226 on the new, smaller Cowtown barrel pattern to earn the $15,000 barrel racing championship.

The victory pushed Mowry’s 2022 EquiStat earnings to more than $1 million.

“Will” was trained and futuritied by Mowry and has more than $300,000 in lifetime earnings. The gelding she describes as a gentle giant ran in nine of 10 NFR rounds this year at his first NFR appearance with Mowry, adding $57,567.7 in NFR earnings to his resume.

The Triple Crown of Rodeo is an annual bonus that will pay $1 million to any one athlete or collection of athletes who win first place in any three consecutive WCRA Major Rodeos.

“It has taken me more than a decade to earn a near $1 million,” Landingham said. “Thanks to this organization, it only took me three rodeos. This award has done nothing but raise the rodeo bar, and I hope it opens the eyes of others, because they are truly making million-dollar opportunities over here.”

Landingham’s grit and determination was evident before the Californian even stepped into the Cowtown Christmas Championship Rodeo for the second annual event in Fort Worth, Texas.

He drafted Pickett Pro Rodeo’s Untapped, a six-time NFR bucking horse, in the Showdown Round. The soon-to-be millionaire notched the top score in the round with an 84.5. Later in the Triple Crown of Rodeo Round, Landingham conquered his pick, Freckled Frog (Pickett Pro Rodeo), for a monstrous 89.5 points.

Landingham’s road to this historic moment met tragedy at every corner, beginning in 2010 when disaster struck in Houston while riding bulls. Landingham suffered broken ribs, fractured his back and shoulder on top of a lacerated liver and a collapsed lung.

After recovering from his injuries sustained in Houston, Landingham was dealt another sucker punch when he was involved in a gruesome car wreck in May 2011. The car was crushed, and Landingham shattered his left leg and broke two bones in his riding hand. The shattered glass from the accident also wreaked havoc on his musculature, requiring a large portion of his triceps muscle to be removed after they were shredded. Landingham wouldn’t awaken for two days after being transported to a Portland, Oregon, hospital.

Landingham rehabbed his broken body for 18 months. But the worst was yet to come. In 2013, his mother, Wendy, was diagnosed with ovarian cancer shortly after the same dreaded disease took her mother, Landingham’s grandmother, way too soon. After a courageous four-year fight, with RC by her side, Wendy died in February 2017.

Shortly after the death of his mother, another curveball happened with a wreck in the arena when a horse fell over and dislocated his left shoulder. Much of Landingham’s rodeo career was delayed until 2021 due to a series of three shoulder surgeries after a screw and a chunk of bone broke off inside the joint.

Landingham returned to riding again in February of 2021 and hit new heights in this comeback, which has included back-to-back return NFR trips in 2021–22 and five WCRA Triple Crown of Rodeo events.

WCRA is a professional sport and entertainment entity, created to develop and advance the sport of rodeo by aligning all levels of competition. In association with the Professional Bull Riders, WCRA produces major rodeo events, developing additional opportunities for rodeo-industry competitors, stakeholders and fans. To learn more, visit wcrarodeo.com. For athletes interested in learning more about the WCRA Virtual Rodeo Qualifier VRQ system, visit app.wcrarodeo.com. 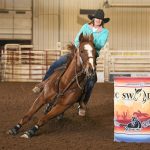 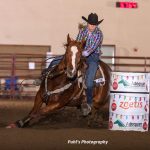