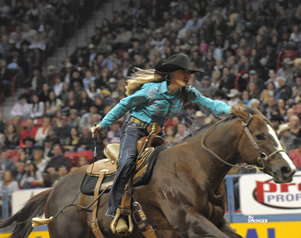 “Stitch is a very consistent barrel horse. She often makes the same runs, but pushes a little harder at times,” said Richman of her 10-year-old sorrel mare Xtrared.

The first round ended in a tight race as Richman, of Glendora, California, placed fifth with a time of 17.48; only .13 behind round winner, Lee Ann Rust, who turned in a time of 17.35. “It was a good run. She [Stitch] was real smooth and felt like she was on rails. I had actually predicted that it would be a little faster then what it was,” said Richman.

Christina stayed to watch her competition through the course of the week and knew that her last run would have to be outstanding in order to sit well in the average as Rachael Boyle stopped the clock with a 17.04 in the second round of slack on Wednesday night.

“I just thought to myself; with that run, they should just write her the check now, because I didn‘t think that anyone could touch that time,” said an impressed Richman.

Richman then returned to the arena for the second round and dominated the cloverleaf when she turned in a smoking time of 17.02 to take first place.

“Honestly, it felt like the same run, except that she had left the barrels harder. Stitch is often hard to gauge because of her consistency, but when I looked up and saw the clock as we were running out, I was completely shocked,” Richman expressed excitedly.

Richman, a two time National Wrangler Finals qualifier, is currently sitting 19th in the 2012 WPRA World Standings as of press time, and attributed much of her success in Redding to the ground conditions.

“I was really impressed. The ground is usually very deep, but I think they did a great job with it,” she said.

Benette Little, Ardmore, Oklahoma, was able to earn her second place position in the average with a time of 34.60 on two runs, which tied the 2011 Redding Champion, Linda Vick. Her first run of 17.38 placed her second in the first round, followed by a fourth place finish in the second round with a 17.22.

Smuggled Horses in West Texas Found to be Diseased