Wenda Johnson smokes the fastest time of the week on Macgyver Moonflash to win Pool B, while Ivy Saebens and KN Fabs Gift Of Fame top Pool A to lead the pack of eight barrel racers advancing from the WCRA Winter Timed-Event Semifinals to the first WCRA $1 Million Major Rodeo of 2020.

The World Champions Rodeo Alliance paid out more than $394,000 to timed-event athletes from January 7–9 at the Winter Timed-Event Semifinals at the Lazy E Arena. The three-day event in Guthrie, Oklahoma, hosted 320 cowboys and cowgirls from around the globe and advanced 54 timed-event athletes to the Royal City Roundup, a one-day, $1 million major rodeo February 28 at the Sprint Center in Kansas City, Missouri.

The event began with 64 athletes seeded in the preliminary round, with 24 advancing to the progressive round where they met eight contestants seeded from the WCRA Leaderboard. The final round consisted of 16 total athletes (eight from the leaderboard and eight from the progressive round), with the top eight times in the round and the No. 1 from the WCRA Leaderboard in each discipline advancing to the Royal City Roundup.

The Sprint Center will see Ivy Conrado Saebens run barrels in her fourth-straight WCRA major after she clocked a 16.961-second run to win Pool A aboard the 2019 National Finals Rodeo average champion, 2009 mare KN Fabs Gift Of Fame (Frenchmans Fabulous x Mistys Dash Of Fame x Dash Ta Fame). Wenda Johnson surged to the top of Pool B on 7-year-old gelding Macgyver Moonflash (First Moonflash x Touched By The Moon x Black Moons Arising) to lock in the fastest time of the week with a 16.773.

Breakaway roper Hope Thompson finds herself going to her fourth-straight WCRA $1 million major after taking the No. 1 spot in Pool B with a 2.27-second run, while Sloan Anderson won Pool A with a time of 2.38 seconds.

Team roping duo Clay Smith and Jade Corkill, who own five world titles between themselves, will pack their bags for Kansas City after a 5.60-second run, good for the No. 1 spot in Pool A. Cody Snow and Paul Eaves earned the top spot in Pool B with a 6.32-second run.

Minnesota cowboy J.D. Struxness earned the fastest time of the week in steer wrestling when he muscled a steer in 3.70 seconds. Cody Devers topped his bulldogging pool after notching a 4.79-second run.

The three-day event concluded with tie-down roping, as the final pool was neck-and-neck with not a single run over 8.0 seconds. Ryan Thibodeaux went home in the top spot in his pool after landing the fastest time of the week with a 6.91-second run. Caddo Lewallen is going back to Morrison, Oklahoma, with $10,000 after winning his progressive-round pool and the final-round pool, with a 7.70-second run in the finals.

On Saturday, February 29, Fans can tune in to the Royal City Roundup on February 29 on a CBS Network broadcast at 12:30 p.m. ET.

All results and payouts can be found here. 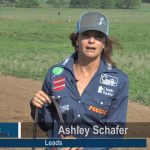