Article by Tanya Krause Randall, originally published in the August 2004 issue of BHN.

The irony is that for all the modern and technological advances, getting to the rodeo is still one of the biggest headaches – even if you love to travel. If it can go wrong, it will. Travel trou­bles make for great stories, but they’re enough to make even the most gung-ho traveler think twice about hitting the road.

Are we there yet?
The mother and daughter duo of Dolli and Jolee Lautaret, Kingman, Ariz., are veteran travelers when it comes to crossing the country in pursuit of rodeo riches. Dolli has narrowly missed the Wrangler National Finals Rodeo (WNFR) in the past, while Jolee has made it twice. Both have qualified multiple times to the Origi­nal Coors Women’s National Finals Rodeo in Fort Worth, Texas. Needless to say, they’ve been on the road a lot.

“The longest we’ve ever stayed out was probably two months,” Jolee said. “Six weeks is usually the max. Our horses usu­ally do better if we can get them home for awhile.”

Sometimes their horses have attempted to go home on their own.

“We both got really tired one night on our way to a rodeo in California,” Jolee recalled. “Since most of the California rodeos are pretty close to home, we don’t really know the area really well—where the best places are to lay over. So, we pulled off into this fairgrounds. They had a lot of covered pens to show cattle in so we put our three mares in the arena and tied the gelding next to them. We were only going to be there long enough to get a few hours sleep and be on our way again.

“We hear the gelding making noise, but we’re so tired, we ignored it. When he kept at it, we realized something was wrong. It was almost dawn anyway. When we got out, we found the gelding tied to the fence, but the mares were all gone!

“We found them in a grassy field where the arena used to be. When they saw us come around the corner of the building with the halters, their heads came up and they just took off! This fairgrounds had a lot of paved road between the buildings and they ran all over the place. Luckily, they didn’t run to the main gate and get out on the highway.”

One of the mares was Im Miss Sticks (Belle), her WNFR horse.

If loose horses weren’t a big enough wreck, Jolee and Dolli have had to go through several automobile accidents.

“We had just bought a mini-Frieghtlin­er used,” Jolee recalled. “We hydroplaned right outside of Weatherford (Texas) and totaled everything. We’re lucky to be alive after that one. We had to buy a new truck and trailer to get home. We had another wreck outside of Las Crusas (N.M.) with a lady who was speeding. It was exactly two weeks after our first wreck.”

Unfortunately, for the Lautarets, get­ting lost can be just as dangerous. On their way to a rodeo in Montgomery, Ala., they took a wrong turn looking for the coliseum. They ended up in a less than desirable neighborhood in the middle of the night.

“They had police patrolling the area at all times because it was so bad,” she said. “They escorted us out because they didn’t think we’d get out of there safely.”

Rodeo travel means doing a lot of dri­ving at night and sleep deprivation. At the time of this interview, the Lautarets were in Salt Lake City, Utah. They left Salinas, Calif., between 4:30 and 5 p.m. after the short go. They arrived at Salt Lake at 7 a.m., just as slack was starting.

You think you had a bad Fourth?
Kristin Weaver, Mount Centre, Calif., wins the prize for most mishaps over the Fourth of July run. Unfortunately, she’s no stranger to Cowboy Christmas gremlins.

“It happens every year,” Kristin said. “I had such a good spring, but I kept think­ing ‘when’s it coming?”‘

Her answer was Reno.

In Reno, she put up her electric fence to pen her horses, Bud Light and Goldie, but the battery wasn’t working. Bud Light took the fence down and aggravated Goldie, who got tangled. No serious harm was done, but for Kristin’s big headache.

She placed at the rodeo, but Bud light pulled a shoe and she had to find someone to replace it.

Unfortunately, her winnings stayed in Reno at the Ford dealership. Her truck had to go into the shop, but some­one forgot to check how well the air fil­ter was attached. It wasn’t.

“On the way to Greeley it starts hissing and losing power,” she said. “Luckily, we stopped at a friend’s in Utah, who just happens to be a mechanic. The air filter wasn’t on right, and the engine was just sucking in all the junk”

Kristin’s hauling partner, Australian Rachelle Maloney, had gone with her to Greeley, but went to Belle Fourche, S.D., since she didn’t make the short go.

Although Kristin had given her direc­tions, some truckers thought she should go another way and see the sights, so to speak. Rachelle ended up taking a mountainous detour by Mount Rushmore through a lightning and hail storm. She also hit a deer.

Kristin also ran at Cody, Wyo., between runs at Greeley. “Scott Johnston was help­ing me drive. We hit a deer … took the wrong turn … went through the moun­tains. We ended up going five hours out of the way to hit a deer!”

The Wrangler Pro Tour in Vernal, Utah, was next. She and Rachelle were back together. In the meanwhile, they had lost the grass hay that was on top of the trailer in the hay rack, and nearly took out a car behind them when a bag of shavings fell. However, it was the hay that was going to be a big problem.

“We couldn’t find any grass hay,” Kristin said. “Everything was alfalfa. I finally found a 20 percent grass-alfalfa mix. I had to run my mare Goldie (Ittys Sis) because Bud Light (Ladybug Charger) hurt his foot. She bled on me bad. I didn’t know what to do because I’d never had one bleed before. Rachelle’s mare was tying up at the same time. It had to be from the change in hay.”

Desperation forced Kristen to drive up to someone’s ranch in search of grass hay.

“I saw some from the road, and just turned in their driveway,” she said. “I told them that I was desperate, and they let me buy some grass hay.”

Because of border restrictions, Rachelle couldn’t take her Aussie mare across to Canada. So she jumped out of the rig and went back to California for Salinas. Kristen continued onto Calgary.

Calgary’s been pretty good to Kristen – when she’s in the arena. Out of it is anoth­er story. In 2002, she blew the transmission in her truck leaving Greeley. She borrowed Casey Branquinho’s, but that left her with­out her camper – her home away from home. The lanky barrel racer spent the week in Calgary in a one-person, Wal­Mart special tent.

This year she had to deal with a blocked and leaking sewage tank in her trailer on the way to the rodeo.

“First, I had to find a place to pull over and dump it,” she said. “Then I had to crawl under and duct tape it.”

“The engine light came on again,” she said. “I think I put some bad diesel in it. I ended up getting there late. It was raining, and I tipped my first barrel on my first run and placed on my second. It was a costly barrel, because I would have been coming back.”

Meanwhile, Bud Light is still sore on his foot. She’s icing it every couple of hours when she can. He pulled the shoe again Calgary, and she had to find another horseshoer to replace it.

“He’s got synthetic material around his hoof wall,” she said. “It’s starting to apart. I have to ice him like a human, because I can’t stand him in a bucket of ice. The water makes the material brittle.”

The icing on the cake Kristin explained, “I live at my grandmother’s ranch. I had sent her a large check home to cover board, but I told her to hold it for a week. She forgot and cashed it. I was overdrawn, had $60 in my pocket, and one tank of gas. I pulled into Calgary on fumes.”
While being interviewed for this article, Kristen was on her way to Salt Lake City from Calgary. The check engine light just came on. 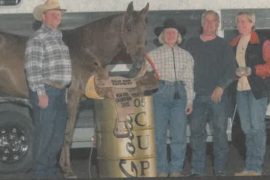 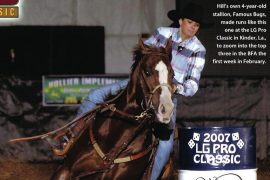