Troy Crumrine is the decade’s top hand with $2.2 million in earnings.

Without a shadow of a doubt, Troy Crumrine is the leading rider of barrel horses. The Waynesfield, Ohio, barrel racer has ridden horses to $2.2 million in earnings. That’s $1.3 million more than the second-ranked rider Cody Bauserman’s $871,474.

From January 1995 to December 2005, Crumrine has won 37 futurities and 20 derbies. Prior to 2000, he had yet to win one of the “major” futurities. Sissys Little Coin and the Paint Horse HL Sprite changed an that. His first major victory was the Speedhorse Silver Cup Futurity with HL Sprite. He went on to win the Speedhorse Gold Cup, Old Fort Days and World Championship futurities with Sissys Little Coin, the leading money-earning futurity horse of all time.

Crumrine, 34, started riding when he was 9 years old and started running barrels when he was 14. After a brief stint in the construction business, Crumrine started riding horses full time. He and his wife, Renee, have two children: Trey, 6; and Madison, 4.

Bauserman, 33, got his foot through the door of the futurity world with the talented stallion Nik Dell in 1997. Having seen Bauserman handle the stallion, million-dollar cowboy Talmadge Green thought he’d be a perfect fit for the temperamental mare Likely Fuel. Bauserman won two futurities on Likely Fuel, including the 1999 Old Fort Days Futurity championship.

Other impressive championships claimed by Bauserman include the 2001 All-American Quarter Horse Congress Sweepstakes with the Paint Horse Kickin Jo (the event was open to horses of all breeds), 2004 Speedhorse Gold Cup and Silver Cup futurities with Promises To Dash, and the 2004 World Championship Futurity with BF Shenanigan. He was the leading futurity rider in 2004.

Chris Coffey, of Glasgow, Ky., is the fifth-ranked rider with horses earning $621,434. His standout victories include a 2003 Speedhorse Silver Cup championship with Romance Amd Money and a 2004 Old Fort Days Futurity championship with Leo Nick Bar. 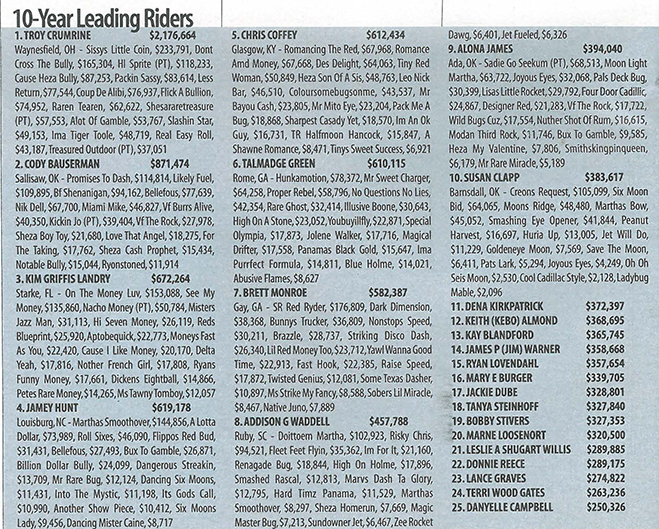 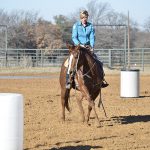