All over the country, barrel racers are hitting the highways. Most travelers will prepare their tack, horses and personal items for the long haul, but they overlook what is probably the most important piece of travel-related equipment—their trailer.

While it’s one of the largest, and seemingly most rugged, items you can own, horse trailers require tender loving care. In fact, neglecting your trailer’s maintenance now can cost you big bucks in the future.

Your trailer may look like it’s in good condition, but problems could be lurking under the surface.

The four major components that are most important when maintaining a trailer are bearings, brakes, tires and lights.

“Some of the most important stuff that a trailer owner needs to keep track of and keep a close eye on are the wheel bearings,” says Greg Knuteson, head of the Service and Parts Department for Durham Trailer Repair in Weatherford, Texas.

Bearings that have not been properly maintained can cause some of the most expensive repairs a trailer can incur, due to the potential bad bearings have for damaging and/or ruining wheels and axles. Therefore, keeping bearings adjusted right and packed tight is vital.

To check the stability of trailer bearings, you only need to jack up the wheel and grab hold.

“The easiest way to check to make sure your wheel bearings are adjusted properly is to get that tire up off the ground, get a hold of that tire and rock it back and forth,” Knuteson says. “If it’s loose and has got play and kind of thumps in there, then you know the bearings need some attention.”

Looseness and “thumping” are not signs that bearings simply need to be re-greased, but that there are much bigger problems.

“There may be plenty of grease in there, but [the looseness and thumping are] telling you that the bearings are loose, so there’s a lot of play in there,” Knuteson says. “As the trailer is going down the road and around curves, driving is putting a lot more stress on the bearings because there’s so much play in there.”

Inspecting your tires for wear and correct air pressure is important, but you should also remove the tire and check your bearings and brakes as well.

Aside from play in the wheels, which indicates a major bearing repair in the future, there are other ways owners can check bearings before major damage has occurred.

“If they are able to take the cap off, look and see what color the bearing grease is, see if there is any discolorization, then it would be time to bring it in to a service dealer,” says Hank Nelson, Service Shop Manager for Sundowner Trailers of Texas in Fort Worth.

Repairing, or even maintaining, sound bearings is not something that Nelson recommends people should do on their own unless they are mechanically inclined or trained to do so. Instead, he believes bearing maintenance is one of the things that should be done by a professional.

“Depending on how much hauling is done, we try to say come in at least once a year to have your bearings done,” Knuteson says. “Now these guys that are on the road for a living, they’re going to travel a lot more miles than the average horse guy does, so they’re going to get theirs done sooner than that.”

Brakes
Making sure your brakes are working is the next highest priority in trailer maintenance. Brake problems are one of the easiest things for people to diagnose themselves because the clues are obvious. Squealing and metal-on-metal grinding noises—or simply the feeling that the brakes aren’t engaging properly—are a sign that work typically needs to be done.

Nelson stresses that drivers need to make sure the brakes are not locking up and that they are actually engaging, as well.

“It’s a simple thing, where you can drive forward and manually override the brake control and make sure the brakes are working,” he says. “Also, make sure you’ve got your brakes set right, that way you’re not hitting them too hard and causing flat spots on your tires.”

For those knowledgeable enough to work on the brakes themselves, Knuteson says to remember that repairs will be dependent upon what type of brakes your trailer has.

An often-overlooked part of a trailer’s braking system is the breakaway battery, which automatically triggers a trailer’s brakes to engage in the event that the trailer becomes unhooked from the hitch.

If it has been a while since you’ve had your trailer on the road, it’s important to load test the breakaway battery. This can be done for free at most auto parts stores. 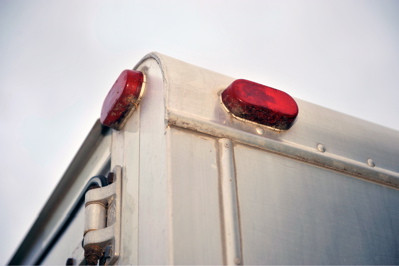 Broken or non-functioning lights can pose a major risk to you and your horses should your trailer break down at the side of the road.

Checking the tires and lights on your trailer is the easiest bit of preventative maintenance an owner can perform, and one that can have the most benefit.

Simply walking around the trailer and inspecting all lights before leaving on a trip can save an owner big trouble if a problem should occur during hauling. Being stuck on the side of a highway at night with no working lights creates a dangerous situation, for you and your horses, and is something that can easily be avoided with a little foresight.

Tires, including spares, should also be checked during every pre-trip inspection for correct air pressure, uneven tire wear, valve stem and general damage and signs of dry rot, especially if the trailer has not been driven for several months. Blowouts from old, damaged or poorly inflated tires can threaten the safety of you and your horses, who are especially vulnerable during a crash.

Wiring
If you inspect the wiring in your trailer—even if the trailer is new—you might be shocked at what you find. According to information from USRider.org, wiring problems can cause major issues for trailer owners, at times requiring a complete re-wiring of the trailer’s systems.

It’s important to check your trailer’s wiring for sections that come into contact with sharp edges, as well as wires that are improperly attached or that have no protective covering, poorly routed wires and wires that are either too long or too short.

Lift floor mats and check the integrity of your trailer’s floorboards for worn, broken or rotting material.

Knuteson says he’s seen some of these problems caused by owners modifying their trailers, such as adding an air conditioning unit. Checking to make sure you have a good ground through your shore power chord will prevent most issues that can arise if there is a problem.

For major or minor shocks to occur in this case, there is likely a problem with the grounding of the 110-volt power source you plug into when you park your trailer at an event or campsite. To avoid the uncertainty of whether the power you’re plugging your trailer into is properly grounded, Knuteson advises performing a simple test.

“They make a little tester that you can plug into one of your outlets,” he says, “and it will tell you that your trailer and your outlets are wired right. Mostly RV people use them. Horse trailer people haven’t quite caught on to how much that saves them trouble-wise to check that power before they plug in.

“Not everybody’s power is wired right.”

Testers that plug into a regular 15-20 amp outlet can be found at home improvement stores such as Home Depot and Lowe’s. For the bigger 30 amp and 50 amp services, the testers will likely have to be purchased through an RV supply store.

Floorboards and Mats
Nelson says another area overlooked by many owners is the inside of the trailer, especially the floorboards and mats.

“They need to pay attention to how dirty the inside of the trailer gets,” he says. “Clean it out every now and then, and that will help deplete the amount of rust that builds up on the framing of the trailer.”

It’s also important to remove and replace old or damaged mats to prevent your horses from having unstable footing when they are being hauled. The amount of extra work a horse has to do to simply stand up when footing is unstable can have a big effect on how well he or she performs once you unload at an event.

Inspecting and repairing any damage to floorboards is also important for the security of your horses. File down or sand rough or splintered edges, fill gouges or replace entire damaged or weakened sections before they become a major problem.

Clean the back of your trailer on a regular basis to avoid rust damage to the frame underneath from waste buildup.

While major body work maybe necessary if you have a blowout on the highway or you are involved in an accident, often times, minor scrapes, punctures and tears can be repaired with a patch kit that is readily available at most hardware and home supply stores. Aluminum, fiberglass and even rubberized roof repair kits that cost between $5-$10 can save hundreds in repair costs if the same problems were taken to the repair shop.

Similar body work, such as popped rivets or broken tie hooks or rings, can be fixed with a simple, and easy to use, hand riveting tool that costs less than $20 and can be found at most home improvement stores. For more specialized items like window frames, replacement glass and model specific parts, there are a plethora of Web sites that deal in replacement parts that can save you a great deal of money.

Vigilance is Key
You don’t have to have a great deal of mechanical knowledge to pay attention to the way your trailer looks and runs. The warning signs that present themselves are readily apparent to owners who are looking out for them.

“Most everything, if somebody keeps track of what’s going on with their stuff and looks it over, they can definitely avoid a lot of major expenses,” Knuteson says.

Between yearly checks by a professional and routine inspections on your own, Nelson says it’s easy to keep your trailer in top performing shape.

“Just walk around and make sure to give it a good check before you leave,” he says. “That way you can see if there’s anything wrong, or if it’s making any new noise. Just paying attention to it a little bit is all you need to make it last.”

Send Them to School

Slow to be Fast: A Colt’s First Year on the Barrels with Kassie Mowry

No Quick Fixes: Correcting Issues on the Pattern

Position Yourself for Success: Axis Points