Denver, Colorado — January 26, 2020 — When the National Western Stock Show Rodeo came to a close January 26, nearly $600,000 in prize money had been distributed. 2019 Women’s Professional Rodeo Association Rookie of the Year Carly Taylor clinched the Denver barrel racing title. Aboard her talented 9-year-old mare Diva Deniro (PC Frenchmans Hayday x KC Bully x Bully Bullion), the Andersonville, Tennessee, cowgirl stopped the clock in 14.99 seconds in the finals for the win. She collected $9,133, which should give her a significant boost in the early-season WPRA world standings.

Read more about Taylor’s breakout year of rodeo and Rookie of the Year title here.

One contestant was center stage at the end of the bull riding for a second time. Brody Yeary of Morgan Mill, Texas, was one of two riders to last eight seconds in the final round of bull riding. His 83.5-point ride on Cervi Championship Rodeo’s Rawhide was the highest score, so Yeary got the title. He also won here last year. Reigning world champion Sage Kimzey of Strong City, Oklahoma, was the other successful bull rider on Sunday. Yeary’s win was worth $7,860. He was ranked 8th in the Professional Rodeo Cowboys Association world standings prior to his win at Denver, so this could give him a boost. If Yeary continues at this pace, he is likely headed to his first Wrangler National Finals Rodeo in December.

A newly formed duo took the title in the team roping. Cody Snow from Los Olivos, California, and Paul Eaves from Lonedell, Missouri each collected $6,471.

Stetson Jorgensen from Blackfoot, Idaho, is coming off of his first NFR qualification in the steer wrestling. That momentum carried him to the National Western title with a 4.0 second run. Jorgensen was the high-money earner in the Denver Coliseum at $9,574.

Jill Wilson Leads Fort Worth Semifinals Qualifiers Through Round Four 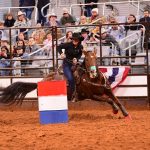