LAS VEGAS—December 2, 2021— It took two speedy times of 13.77 to win the first round of the 2021 Wrangler National Finals Rodeo barrel racing, and Cheyenne Wimberley and Amanda Welsh both found themselves taking their first career victory laps inside the Thomas and Mack Center Arena. Each cowgirl pocketed $24,166.64.

First-time Wrangler National Finals Rodeo qualifier Amanda Welsh left it all on the line in Round One when she and 11-year-old gelding Frenchman Fire Fly turned in a 13.77 to split the round with Cheyenne Wimberley. It marked the first NFR go-round win for each respective cowgirl.

“I’m on Cloud Nine. I can’t really explain the feeling,” Welsh said. “My first round-win here, my first NFR. I knew my horse had the potential to do it, and I just wanted to do my job so he could do his.”

The Gillette, Wyoming, resident came into the NFR in the No. 7 position, and with $1.2 million to be doled out over the course of 10 days in the barrel racing, the pressure was on to show up in style.

All that preparation began prior to Round One. Traveling to 59 rodeos over the course of the regular season, which begins on October 1 and ends on September 30 each year, Welsh gave “Firefly” a much needed rest after the Badlands Circuit Finals from October 8–10. She then sent him to Nirvana Equine to swim and stay in shape. Their next outing was the WPRA World Finals in Waco, Texas, from November 11–14. Those were Firefly’s first runs back after the break, and while Welsh says he was slightly off-pace in the first rounds, he continued to gain speed. They next went to a few more jackpots and smaller pens to get accustomed with the Thomas and Mack Center setup.

—> Read more: Road to the NFR with First-Timer Amanda Welsh

The duo came into Vegas in top form and used their practice sessions in the Thomas and Mack to the best of their ability to prepare for Round One.

“I just really wanted to make sure in practice I trotted him through once for him to look around at things, see where that first barrel was, and then I kind of cruised him through,” Welsh said. “I had him a little too far to the left going in, and at practice I caught [the first barrel] coming out. So I told myself, just move him over for tonight, just a little bit, and he nailed his first.”

For her career-first NFR and career-first round win, Welsh will take home $24,166.64. While the money is monumental, Welsh says nothing compares to the dream-come-true moment of running down the alley at the Thomas and Mack.

“I was a lot less nervous than I thought I was going to be. I could tell he was just feeling good; ready to do his job,” she said. “I made sure that I was ready to do mine.”

The horse race is only going to get better in Vegas as the top 15 ladies in the WPRA continue to battle it out for championship honors. Welsh and Firefly are ready for the challenge.

“He likes the music and the crowd, so these next nine nights are going to be pretty exciting,” Welsh said.

“Just to get here and be able to perform here, which you think about and dream about, and then it’s a reality, you just cannot believe it,” Wimberley said. “It’s taken me a lifetime to get here. I bought my card in 1986, and I’ve been here five times, and this is my first go-round win. It’s a blessing to be able to compete at this level and to ride athletes at this level.”

She says the biggest key to getting the W in Round One was cleaning up her angles, especially to the notoriously tricky Thomas and Mack first barrel.

“I really studied my angles. I’ve had some trouble here, and I felt like the angle to the first barrel is really important in this arena. It’s not an arena we run in every day, that blind angle to the first barrel,” Wimberley said. “I needed to prepare in my mind, because it’s your first night and practice is different. I studied more film from here than anything. I quickened up my reaction and his reaction.”

She’s been running “Rocco” for several years. The gelding is lethal in small pens, having qualified to the Final Four of The American twice with his trainer Brandon Cullins in addition to multiple futurity and derby victories. Wimberley says honing in on the horse’s fitness level after Rocco took some well-deserved time off was key to bring him back strong.

“We’ve really worked on building up his fitness level,” she said. “He hasn’t been hauled in a year. I brought him back out at Salinas, and I feel like that year really helped him. He hasn’t had a year off since he started his futurity year. And I think maybe that’s what the plan was. Sometimes the greater plan is the one that comes before this.”

The victory was also incredibly meaningful for Rocco’s breeder and owner Weaver.

“Robin’s here, she’s been so supportive. I’m also riding KN Fabs Mist Of Fame for her and have ridden these horses the last three years, and for an owner to give these kinds of athletes to you like they’re your own, she’s a phenomenal owner,” Wimberley said. “What a win for her. She’s seen Rocco at every level, and to get him to this level has got to be a true fulfillment for her and her program.”

WPRA World Standings (After Round One)

2021 WPRA World Standings (Prior to NFR) 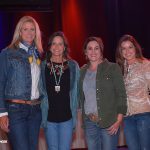 Dona Kay Rules the Roost in Round Two of Wrangler NFR

The Amazing World of Essential Oils