In the fall of 2012, Kay Lynn Schulz was riding high. She had just won the Elite Extravaganza for the second time aboard her home-bred gelding, KS Dox Cajun Bug.

The dental hygienist and mother of two had the support of her family—husband, Steve, and their two boys, Mason and Sterling. Schulz made arrangements with her employer for extended time off as she and “Cajun” took off on her dream quest— trying to qualify for the Wrangler National Finals Rodeo.

Yet Schulz’ plans began to unravel at a barrel race on New Year’s Eve. Her once steady partner ducked a barrel. Like any good horsewoman, Schulz gave Cajun the benefit of the doubt, taking him to the veterinarian to see if something was wrong.

Although the problem seemed simple at first, Cajun progressively got worse, and the possible causes grew increasingly complex and perplexing. What began as a journey to return Cajun to top form soon became one to save his life.

When advancing arthritis in a knee ended the career of Schulz’ rodeo mount Lady Bug Bug in 2002, she decided to breed the granddaughter of Bugs Alive In 75.

“I wanted to breed her to Sun Frost, but he was a little beyond my budget,” Schulz said. “I talked with Tigh Cowan and decided on PC Dox Cajun.”

Cajun was foaled in 2003, and Schulz’ entire family had a part in his training and competitive career. He began his career in the fall of 2007 at local jackpots near Schulz’ San Antonio, Texas, home.

His first national appearance came at the Barrel Futurities of America World Championship derby in Oklahoma City. He placed twice, once with Schulz in 2008 and once with her sister, Jennifer Crawford, who rode the gelding most of 2009 due to Schulz’ pregnancy.

In 2010, Cajun carried Schulz to the Women’s Professional Rodeo Association Rookie of the Year title in the Texas Circuit, and they made their first appearance at the Texas Circuit Finals Rodeo in Waco, Texas.

“Before I went to the circuit finals, I made the decision that if I didn’t win it and qualify for the National Circuit Finals Rodeo, I would turn him out for 2011 to concentrate on the toughest year of dental hygiene school,” Schulz said. “I would resume running him once I finished school in May 2012.”

Cajun didn’t miss a beat after his vacation, running a 16.9 on a WPRA standard pattern at the American Novice Horse Association Shootout in Waco. They went back to Waco two months later and won the 1D at the Elite Extravaganza in 2012. Schulz planned to win enough money in 2013 to qualify for the lucrative winter rodeos so she had a better chance at making the NFR in 2014.

Then Cajun ducked the first barrel on New Year’s Eve.

Between the Reins with Smokey Gold Jack 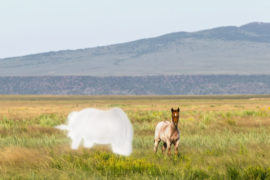 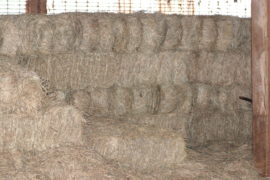 Fear the Fungi—Hay and Inflammatory Airway Disease in Performance Horses