“Standing on that stage, even standing in the alley and you know you’re really going to be next [to walk across the stage and accept the world championship buckle], it’s still setting in but it feels awesome,” Kinsel said of the moment when she felt the reality of her world championship victory.

Everyone knows a world championship isn’t won in 10 days, but rather in the hours, weeks and years of hard work leading up to those 10 days in Las Vegas at the National Finals Rodeo. In this year’s “World Champion Reflections” column, newly crowned champion Hailey Kinsel will share her story of life, hard work, horses and barrel racing. Look forward to getting to know the real person behind the buckle in the candid telling of Kinsel’s life experiences, where she hopes to shed light on the reality, as she knows it, of professional rodeo.

Barrel Horse News: We have a full feature story on your experience at the NFR beginning on page 58 in the February 2019 issue of the magazine, but for now, tell us how the drive home after the Finals felt.

Hailey: Driving home I was actually sick. After Round 10, the adrenaline broke and I think we were fine up until that point, because we were still rolling, but as soon as that was over I remember my throat hurt Saturday night after and I was like, oh no. The whole drive home we went through like 12 boxes of Kleenex. It was funny, because I did take the entire drive home to reply to everybody who had reached out as far as my friends went and try to make contact, so it was like “Yay, we’re celebrating,” but it was also like “I feel awful.” It was a mix of emotions but it was pretty neat, because there was a lot of driving time, which meant a lot of time to think. I got to talk to people whom I hadn’t really gotten to keep in touch with throughout the week and reflect back on everything, and it was fun. I got to watch everybody else’s runs, so that was fun. I went back and watched the other rounds that I hadn’t gotten to pay attention to as much throughout the week.

BHN: How do you keep “Sister” (DM Sissy Hayday) healthy and sound all year long?

Hailey: There’s a lot of moving parts. My vet, David Dutton, DVM, is exceptional and we stay in very close contact. Sis is one that is well built and doesn’t have any issues that come with her, but we do try to stay ahead of things. I do routine vet visits before I’m going to start getting ready for an event, so not necessarily right before an event and not right after an event when something goes wrong. It may be three or four weeks in advance. For instance, after I came back from the Finals at the end of December I took her for a vet visit and he just does a soundness check and sees where she’s at so we know going forward what we’re dealing with. I think that helps us stay ahead of any problems.

My farrier, Bob Hodges, is awesome. I believe soundness starts from the ground up, so he helps out a lot keeping everything in check and works closely with my vet on my horses and then we just try to keep an eye on everything. I do some therapy type stuff—I like liniments, massaging and acupuncture type massages, then I like ice boots and poultice, but mainly it’s a lot of extreme care. I don’t use a lot of alternative therapy-type stuff. Sometimes the simple approach is the best approach. I think for me, if I was to get into a certain fad I might get more focused on that than paying attention to my horse every day, so it takes away from using my eyes and my instinct. For me, it helps my instincts stay clear and reactive if I keep it simple.

BHN: As far as fitness and conditioning, what is your process?

Hailey: Sister does well with breaks. Being young is partly how she has a lot of tenacity to run, and it doesn’t take a lot to get her revved back up to run barrels. “TJ” (Thunder Stones), my older gelding, I have to stay on him and make periodic runs. Sis not so much, so it’s nice that after a hard run of rodeos I can give her a week, two weeks, three weeks off, depending on what I have time for, a month if I can, and pull her shoes off when I can. When I start reconditioning, I consider how much time I had off and nearly double that to recondition before making another run. So before the Finals, she got two and a half weeks off of absolutely nothing, just turned out in her pen, which is like a big trap, so she’s moving around every day but not exercising. Then I took two months after that to recondition, knowing that she doesn’t lose a lot of muscle tone in that amount of time.

When I’m reconditioning, I am working on rebuilding muscle tone, strengthening bones and then toward the end getting her wind back up to compete. I feel like if they are that conditioned, I don’t have to worry about lameness as much. I do try to give them breaks if I can, and then when I’m going to get back on after a break I ride for a good while. That’s daily conditioning, 30 to 45 minutes each day of riding. I do somewhat of a racehorse regimen of walk, trot one day and lope, or wind the next day. Toward the end of my conditioning I’m not loping every day, but I’ll walk, trot to really stretch, walking around and then lope to get their wind up. The first few weeks sometimes I’m just walking and trotting for weeks at a time. That does a lot of strengthening and conditioning before you start putting pressure on them.

BHN: What does a typical day look like for you?

Hailey: We’ve got a lot of colts and they are all ours, so that means they have to get ridden. If they don’t, it’s all on me. When I’m home it’s get up and feed, take care of chores around the place and around the house, and then get my bookwork done—anything I need to get done as far as the office goes and taking care of business, and then I go ride. I usually ride in the later part of the day, but that usually takes up at least half the day. Between my mom (Leslie Kinsel) and I, we’re riding 10 to 11 horses a day, so I’m usually getting on five to seven horses a day.

BHN: Circling back to the NFR, you accomplished so much not only winning the world championship but setting the season-earnings record. Was there an instance that really stood out for you throughout the week?

Hailey: A fun part for me was between winning Round One as the first out in the draw to then winning Round Nine as last out. It was cool at Round Nine to look back and see Sister started the Finals strong and she ended the Finals stronger. That’s what I was hoping for. When you’re conditioning and getting ready, you don’t want to have to patch them up during the week—you want them to stay strong or get stronger, so that was probably the highlight for me. She not only stayed good, but almost got better for me.

A Risk Worth Taking 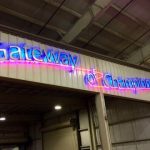