Many organizations and rescues from all over the Country are reaching out to help the residents of Oklahoma both human and animal victims.  Dreaming of Three is a Team of equestrians and rodeo contestants from all over the Country, who throughout the year donate to American Cancer Society, American Heart Association, St. Judes, and animal rescues through a percentage of their earnings in the arena or pledging per hour in the saddle.  However, when it comes to tragedies such as this, the Team will always spring into action to help.

Last year with the Colorado wildfires affecting so many of the horses in that area, Team DO3 raised over $1600 from t-shirt sales and collected over 600 bales of hay to have trucked out to the area to assist those affected.  They also raised over $15,000 for Northstar, the horse that was doused with accelerant and lit on fire in Erie, Pennsylvania.  Even during the droughts in Oklahoma last year, they raised over $500 for Oklahoma Rescue Rangers to assist with the animals at that time and many other efforts when needed throughout the year.

Founder and President of Dreaming of Three, Jackie Harris from Pittsburgh, PA, heard of the news of the tornado and quickly sent Team DO3 member, Sandra Whitcomb, an equine artist, a message about helping get the artwork done for the shirts.  Jackie stated, “I wanted something to honor the horses and people that were lost to the storm. Team DO3 is centered around helping others through our passion of horses, so I asked Sandra to try to depict the horses running from the tornado in fear, and then going into heaven with peace.  Sandra brought to life the image that I had in my head beautifully, right down to the expressions on their face and body language”.  There is a lot of relief efforts happening all across the internet, however, with Dreaming of Three’s t-shirt, it is a very heartfelt Team effort to honor those that were lost, both human and equine. 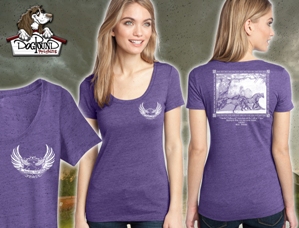 “We want to help the horses that survived this horrific storm”, stated Jackie.  One hundred percent of profits from the t-shirt sale will go to the Orr Family Farm to care for those surviving horses.  Dreaming of Three will also be holding a benefit barrel race on June 1 at Dancing Oaks Ranch, in Poolville, Texas in which funds raised will also go to Orr Family Farm.  Shirts can be ordered through the Store on the Dreaming of Three’s webpage.