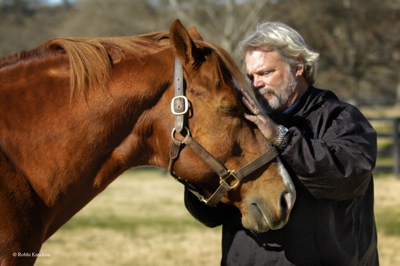 First Down Dash and Scoop Vessels. (photo by Robbi Knudson

“The entire family is here and First Down Dash is resting with a set of Vessels Stallion Farms silks and an ample supply of sunflower seeds in the place which Scoop selected some time ago,” Bonnie Vessels said.

The ranch crew joined the family at the ceremony.

First Down Dash was the top Paternal Grandsire of barrel horses from 2005-2009, according to Equi-Stat, an honor he is on pace to achieve again for 2010.

“If he was a human, he’d be the kind of guy that you’d go down to the barn and sit on a bench in the back of the barn with and talk to all day long,” his owner, the late Scoop Vessels said in an interview with Barrel Horse News earlier this year. “He is just a really good guy to be around.”

While mostly viewed as a grandsire in barrel racing circles, First Down Dash was still in demand as a sire of racehorses, breeding more than 20 mares a year for the racetrack. The World Champion of 1987 who sired the earners of nearly $74 million through November 25, 2010, First Down Dash bred a full book of mares in 2010 and was expected to do so again in 2011.

“He has just done every single thing that we’ve ever asked of him,” Scoop Vessels told BHN in February. “He’s highly intelligent. His babies are very intelligent. They want to please. Whatever you want to do with them, they want to do it, too. I think that’s one of the reasons why they’ve done so well on the racetrack and in other places.” 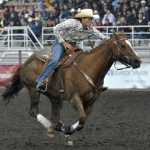