Complementing Unprecedented Live Championship Round TV Coverage, All Rounds to be Streamed Live on RidePass

PUEBLO, Colorado, September 18, 2019 — For the first time, the Indian National Finals Rodeo will be televised, with RIDE TV carrying the Championship Round live from South Point Arena in Las Vegas on October 26. Showcasing the action from previous rounds, RIDE TV will also air five one-hour INFR highlight shows in December on dates to be announced.

The 44th annual INFR will once again take over the South Point Arena October 22–26. More than 400 Native American athletes from 50 tribes in the U.S. and Canada will compete in the Major and Junior-Senior events.

“INFR is honored to join forces with RIDE TV and RidePass to host the first INFR to be carried on live television,” INFR general manager Donna Hoyt said. “This has been a vision and goal for some time. We have a great media partnership with PBR, and it has made this vision a reality for our members. We are excited for INFR professional cowboys and cowgirls to have the opportunity to be on national TV as well as RidePass, the leading western sports digital network.”

“RIDE TV features the highest quality rodeo programming, and the INFR certainly fits into that category,” RIDE TV president Craig Morris said. “The INFR embodies thrilling competition, culture, and tradition, and we believe RIDE TV viewers are really going to love this iconic event. We’re so pleased that our partnership with the PBR has led us to the INFR.”

All 10 rounds of the INFR will also be carried live by RidePass, the PBR’s western sports digital network.

“In representing INFR’s media rights, PBR is proud to bring another rodeo to television, increasing coverage of the sport to meet fan demand while creating new fans,” PBR CEO Sean Gleason said. “Natives have a rich history in rodeo and bull riding, and we will continue to work to showcase these great athletes and tell their stories. RIDE TV has been a great partner of PBR in carrying the red-hot PBR Pendleton Whisky Velocity Tour, and we’re excited about their new INFR programming.”

Bits of Success with Michele McLeod 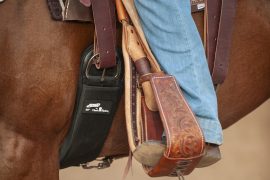