The familiar sound of horses walking along the pavement blends with a new symphony of ropes cutting through the air. This melody is the heartbeat of rodeo and signals the return of the Josey Ranch Summer Schools.

Living legends Martha and R.E. Josey have eagerly opened the gates of the Josey Ranch for their 54th year. This rodeo power couple will once again host some of the fastest-filling calf roping, breakaway and barrel racing schools in the nation.

Over the last three weeks, the Josey Ranch welcomed 150 barrel racing students and 100 calf roping and breakaway students to their 54th Annual Barrel Racing, Calf Roping, and Breakaway week-long schools. The students and their families flooded to the town of Marshall, Texas, excited to escape to the rodeo paradise.

The ropers jumped right in and backed into the box to rope calves the first night of the school. This allowed instructors to gauge what each student needed to work on for the rest of the week. Throughout the day, students alternated from working on their roping technique on the ground to putting their practice into action, roping live calves with one-on-one instruction from world-class instructors. On Thursday night, students competed for buckles in the Randy-Josey Memorial Match Roping, where the competition was salty and showed lots of promising careers for many young ropers. After the competition, students went back to the practice pen until the Championship Roping on the final day.

With three different arenas as well as demonstrations around the ranch, barrel racing students learned about winning techniques, slow work drills and proper equipment. Throughout the week, the barrel racers learned how to keep forward momentum and shave time off their runs, which showed in the match race Wednesday night. Divided into three teams, students competed against each other for bragging rights of the fastest team average. After the match race, instructors took the last several days to go over students’ video footage and teach them how to analyze a barrel racing run. Students then got back in the practice pen and put in two more days of hard work.

Though the week was packed with valuable instruction, there was still plenty of time for a shaving cream fight, a talent show, and the infamous Josey Snipe Hunt.

As the final day dawned, the Josey Ranch was buzzing with excited students eager to show off the skills they mastered and to compete for the championship buckles. As the students and instructors made their way into the arena for the grand entry, there were 14 state flags waving. Students and families had traveled hundreds of miles to hone their skills at the Josey Ranch.

The competition was stiff, as students clocked times that were multiple seconds faster than their times from the first day. Ultimately, barrel racer Brelynn Crooks rode her 20-year-old gelding to victory using a Josey saddle and bit. Addyson Henderson won the breakaway championship with a 2.2, Howard Green won the calf roping championship with a 10.1, and brother-sister duo Preston and McKinlee Paschal won the ribbon roping with an average of 14.6 on two runs.

Students said their goodbyes but made promises to see each other again soon at the 27th Annual Josey Reunion Barrel Race from July 30–August 2. For those under 20 years old, the 40th Annual Josey Jr. World Barrel Race will take place August 7–9.

During a time in the world when negativity is rampant, the Josey Ranch remains a beacon of hope, positivity and joy. Seeing the smiles on students’ faces put things into perspective and makes those who love rodeo forever grateful for the opportunity to drive across the famous Josey Ranch cattle guard. 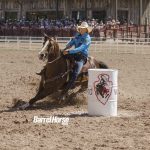 Protect Your Performance Horse with a Custom 5 Star Pad!