FORT WORTH, TX – April 12, 2016 – Ride Television Network, Inc., (RIDE TV) and CenturyLink are pleased to announce that they have reached an agreement for CenturyLink to distribute RIDE TV to their customers.

RIDE TV debuted in the fall of 2014 and serves the equestrian lifestyle community. It will join the lineup of CenturyLink’s Prism® TV in the Prism Sports Plus package on April 19, 2016.
“We are extremely pleased to have reached this agreement with CenturyLink. Being able to tell the stories and show the unique lifestyles of real horsemen and women (to an audience who would not ordinarily see it) has been a life-long goal,” said Craig Morris, President of RIDE TV. “I want to personally thank the leadership at CenturyLink for recognizing the important role that HORSES have played in shaping the world we live in. There would be no Cowboy if it were not for the horse.”

“Prism TV has experienced exponential growth over the past few years and their markets line up perfectly with our core demographic,” said Michael Trujillo, RIDE TV’s Senior Vice President of Global Distribution. “As they continue their expansion across the United States, we’ll be right there with them providing their subscribers with unique programming that embraces the equestrian lifestyle.”

RIDE TV’s original programming includes highly entertaining reality shows, talk shows, documentaries, horse competitions, children’s programming, movies and other relevant equine programming. Other notable programs include This Old Horse, a documentary showcasing the most famous horses in history, Rock Star Vets, an entertaining reality show with a famous equine surgeon, Southern Fried Skinnyfied, RIDE TV’s first cooking show and the only one if it’s kind, where Paige Duke transforms hearty meals fit for a cowboy, into healthy delights that are perfect for a jockey, and extensive coverage of Western and English equine competitions. With a broad variety of lifestyle content, RIDE TV appeals to both passionate horse owners and general audiences who love unique and fascinating entertainment.

Ride Television Network, Inc. is a privately held corporation based in Fort Worth, Texas. The company was formed in 2011 for the purpose of launching a 24-hour, high definition, television network. RIDE TV launched on October 1, 2014 in the United States and is now available internationally. The network features high-quality television programming showcasing both English and Western disciplines and lifestyles and includes live events, reality shows, talk shows, children’s programming, documentaries and other great programming. For more information about RIDE TV, please visit www.ridetv.com. 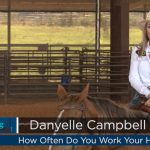 How Often Do You Work Your Horse