As the saying goes, everything happens for a reason. After a series of misfortune, dental hygienist Emily Miller Beisel of Weatherford, Oklahoma, found herself horseless during the height of the 2015 rodeo season before meeting the striking chestnut gelding Namgis D 35 that would change her barrel racing career forever.

“Pipewrench’s” journey into Beisel’s life began when her main mount, Rare Bugs Alive, got in a wreck with a stagecoach in Springdale, Arkansas, at the beginning of a Fourth of July rodeo run in 2015. Not looking to purchase a new horse since she was still in dental hygiene school, Beisel reached out to Kylie Weast (formerly Ward) about leasing the gelding Namgis D 15—a full brother to Pipewrench. Weast wasn’t interested in leasing “Wolfie” but offered Beisel a couple younger geldings for sale. Beisel decided instead to run and season her ex-calf horse until “Wheels” healed from his injuries. However, Beisel’s plan veered completely off track and sent her unknowingly in Pipewrench’s direction when a second devastating injury left Beisel afoot.

“I sent that mare to two rodeos, and she fractured her coffin bone at the second rodeo,” Beisel said. “I called Kylie back and asked her about those two horses. That was on a Wednesday night, and I was out there at 7 a.m. Thursday morning and Pipewrench was in my barn by 4 that night.”

Though Pipewrench’s half-brother Namgis D 33, whom Beisel also tried, won more futurity money and showed more maturity, something about the dark chestnut with the uniquely shaped blaze seemed to fit Beisel. Pipewrench passed the vet check and began his career with Beisel in the tack. It didn’t take long for the gritty gelding to light up the clock in the rodeo arena.

“Pipewrench just needed some time. He was a little later to mature,” Beisel said. “I was just going to season him out at some small stuff. Our first pro rodeo was Sidney, Iowa, and he won it. He took to rodeo pretty quick.”

The 2010 gelding, who’s by Bucks Hancock Dude and out of Central Station by First Down Dash, is all business when it comes time to run, despite his otherwise youthful silliness. Pipewrench performs best when he is hauled alone, because Beisel says it keeps him focused and keeps his mind on the goal rather than his buddy horses.

“He’s a little young-minded, so he has that arrogant attitude. He’s still a young boy,” Beisel said. “But he’s a competitor. He’s got a heart of gold and a ton of try, and when he goes down that alleyway, there’s a different level of focus he has that I haven’t had in a horse before. He knows his job—he’s not a cheater. That horse has never a day in his life tried to short me.”

Pipewrench’s ego is justified both in and out of the arena. He earned the 2017 Ram National Circuit Finals Rodeo barrel racing championship for Beisel and draws attention everywhere he goes. His deep chestnut coat and long mane and forelock are a remarkable contrast against his white blaze. Beisel jokes that Pipewrench most closely resembles two well-known Hollywood heartthrobs.

“Pipewrench is McDreamy [from Grey’s Anatomy]. He’s pretty and he knows it,” Beisel said with a laugh. “He thinks he’s sexy and is such a ham. If he were an actor, he’d be Paul Walker. He’s one of those horses people walk by and say ‘Oh my gosh, he’s so pretty!’ There’s nothing fancy about him, but he’s put together beautifully and just has that presence.”

Good looks and remarkable athleticism aside, at the end of the day Pipewrench is just like any other horse—always looking for a tasty snack.

“He loves to eat—he’s the Cookie Monster,” Beisel said. “When I’m ponying him, he’ll dig in my pockets for treats. He knows after his runs he gets treats; he’s very set in his routine. He loves Mrs. Pastures cookies. They’re so expensive, but he loves them!”

This article was originally published in the June 2017 issue of Barrel Horse News. 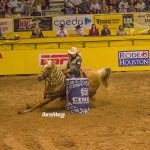 Different Bits with Danyelle Campbell and Best Ever Pads

The Evolution of Team Josey – Martha and R.E. Josey