Tracy Nowlin of Nowata, Oklahoma, has officially qualified for her first Wrangler National Finals Rodeo, and if you kept up with the professional rodeo standings throughout 2018, you’d know she did so with the one and only DJG Madison.

Tracy Nowlin of Nowata, Oklahoma, has officially qualified for her first Wrangler National Finals Rodeo, and if you kept up with the professional rodeo standings throughout 2018, you’d know she did so with the one and only DJG Madison.

The Prairie Circuit Champion has won numerous big rodeos, including Ellensburg, Omaha, Walla Walla, Washington, and Spanish Fork, earning $90,495.80 in 79 rodeos for the year and sitting 12th in the world standings of barrel racing. What’s really impressive about these stats is that she did so on one horse.

“Dolly Jo” is a 2006 daughter of the Royal Quick Dash son Royal Blue Chew Chew and out of Run Madison by Sunset Six. Nowlin was looking for a new calf horse for her son, Ty, when she came across an ad for the mare on Facebook. The family tried to rope calves on her but knew she was not a calf horse. Nowlin made the decision to send the talented bay mare back.

“[I remember] having that gnawing feeling in my stomach, like the kind you have when you know you’re fixing to mess up,” Nowlin recalled that night laying in bed, contemplating her decision.

She struggled with the feeling until 4 a.m. when she finally decided she’d ride Dolly Jo in the morning before making a final decision. Nowlin ended up buying the mare, who at the time was an 8-year-old for $1,850, from Shawn Howell—a former fiddle player for the Texas Playboys who now sells insurance.

Nowlin may not have known the first day what success Dolly Jo would bring, but now she’s enjoying the ride.

“Dolly is a pretty cool horse. And God gave her to me… horses don’t have to be 3 or 4 years old when you start them, they can be an 8-year-old,” Nowlin said.

Below, read a brief Q&A from Smalygo’s interview with Nowlin, who describes Dolly Jo as TV personality and country music star Reba McEntire—smart mouth, do something funny, and crack up. She also says Dolly Jo’s favorite things are to run barrels and then go back to the trailer, and when she gets home, she likes to roll in the mud puddle.

Smalygo: When did you buy your Women’s Professional Rodeo Association permit?

S: What big rodeos did you go to this year?

N: “Fort Worth and San Antonio, Texas, where I won a round. Greeley, Colorado; Houston, Texas; Ellensburg, Washington; and Spanish Fork, Utah.”

S: Could we look for anything spectacular in Vegas?

S: Plans after the NFR?

N: “Houston for sure; hit the big ones.”

S: Have you ever been to Vegas? What do you expect?

N: “I have never been to Vegas. I will probably be in awe and shocked, like everything will shock me.”

S: Anyone you want to thank?

S: How do you prepare for a run?

N: “Always before we run we pray—pray for safety for the princess.”

S: What’s one rodeo you haven’t been to that you want to go to?

N: “St. Paul, Oregon, and I won it just so I could run where the Christmas Trees are. I thought Dolly Jo might turn one, Justin Mckee was there, and said his neighbor was winning it. Ellensburg, I was homesick, but Justin Mckee and Haley Ganzel were there to make it better. And Houston.”

S: What did Ty say when you called to tell him you qualified?

N: “He was at the high school rodeo at Weatherford, Oklahoma, and he hooped and hollered, and Jarvis, his friend, said he was gonna save his money to go to Vegas.” 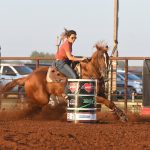 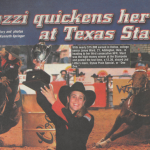 In it Together: Pro Elite World Challenge Producers and Competitors Band Together to Help Community

The Finals from the Stands