Ashley Schafer discusses how she teaches a horse to have fluid, forward motion around the barrels in part one of her two-part training series.

When Ashley Schafer talks about running barrels, she uses the words fluid, forward motion. For the futurity trainer, those words are more than just a catchphrase, they’re the defining principles of how she consistently makes efficient turns and fast runs on multiple horses.

“When I say fluid, forward motion, I mean I don’t want the horse elevating or dumping down in the front end. I want to feel that the horse has cadence and is moving forward between my hands and legs,” Schafer said. “When a horse has good reach, it is reaching forward with its front legs instead of lifting them up and having a lot of knee action or dragging their feet.”

A horse will not have fluid, forward motion if:

Like most trainers, Schafer requires a horse to have a solid foundation before she takes it to the pattern and teaches it to turn. While she doesn’t try to change a horse’s natural style of turning, she does try to enhance the turn by encouraging each horse to reach with its front feet to move fluently with forward motion throughout the turn. How she achieves that goal varies from horse to horse, but the theory remains the same—she rewards the horse with a “release” when it does what she asks it to do.

“Depending on the horse, my release is different but my end goal is the same— fluent, forward motion with good reach,” Schafer said.

Low vs. High Front Ends
Schafer likes her horses to travel level when running barrels. This is because in cases where the horse elevates the front end or drops down in the front end, its reach and speed potential are decreased.

When a horse elevates in the front end, its head will usually rise up and it will have increased knee action, or climbing. High knee action wastes energy and shortens the horse’s stride.

“I feel like a horse loses time on the clock when its knees goes up instead of out,” Schafer said. “If I can get an extra six inches per stride, or even two inches per stride, around a turn because they’re reaching out in front of themselves instead of coming up with their knees, they’ll be faster around the turn.”

To help a horse that wants to be high-headed, Schafer squeezes her legs to ask the horse to round its back up but positions her hands slightly lower. When the head comes down, she releases contact with the horse.

On a horse that is naturally low in the front-end, Schafer squeezes her legs to round the back up and to keep the horse collected, but positions her hands slightly higher to prevent the horse from breaking at the wither. She releases the horse when their head comes up.

“I am basically always working to achieve a good balance. I don’t want too much of any one thing,” Schafer said. “I’m not trying to change a horse’s style, but if a horse wants to drop his front end and I let him work that way all the time, then he’s going to dump on his front end and lose his forward motion.”

Power comes from a horse’s hindquarters, so a horse that’s too front-endy won’t be as strong through the turns.

“He won’t be strong enough behind to drive through his turns, so I need to keep his front end slightly elevated and ask him to drive forward so his hind end is engaged and his front end is pulling,” Schafer said.

Stiff vs. Round
Horses can be naturally stiff or naturally bendy. Both body types, whether they are natural or learned, can affect the path a horse takes around the barrel turn. Schafer uses the counter arc to help both stiff and overly round horses.

“Counter arcing helps free the shoulder up and helps them understand moving away from leg and rein pressure,” Schafer said. “It also helps extend the front-end reach.”

Too Round When a horse is too round, the shoulders do not follow the nose.

“If a horse is too round, I ride to the outside,” Schafer said. “This means when I walk and trot in a small circle, I use more outside leg and outside rein to keep them from floating their shoulder out. I don’t want the horse to lock his shoulder or float it, I want the horse to stay between my hands and legs.”

Too Stiff When a horse is too stiff through its ribcage, one of two things usually happens when turning a barrel:

1. The horse will give its face, but its stride in the front will become short and choppy while the hind end will sling around the barrel, making the horse lose forward motion.

2. As the horse goes into the turn, it will lock its shoulder. While its hip may not float out of the turn, the horse will become bracey, elevate its front end and lose forward motion, making it difficult for the horse to get around the turn.

Horses that are stiff through their body or ribcage will usually have higher knee action when moving out.

“You can’t change what the horse is, but you can get them to be a little more effective to where they reach out instead of up,” Schafer said. “One thing that really helps the horse reach out is being soft in the ribcage.”

When a horse is soft in the ribcage, its hind end—the power source—will drive up underneath itself and the front end will reach forward and help pull the horse through the turn without shortening the horse’s stride.

Softening the Ribcage To soften the ribcage, Schafer walks and trots small circles and asks the horse to bend around her inside leg.

“I use my inside rein to pull his nose to the inside of the circle, and I use my inside leg right behind the front cinch to bend his ribs out. I push there until I feel the ribcage get soft,” Schafer said. “While I’m using my hands and legs together to achieve this, my main focus is the ribcage, not the face. If the ribcage is soft, the face will follow.”

Schafer warns against mistaking that the horse is soft in the ribcage just because it is giving its nose.

“A horse can be soft in its face and still step its hip around, which means it’s not soft in its ribcage,” Schafer said. “If I’m coming into a small circle and I have the horse’s nose but its hip feels like it’s kicking out from underneath me, then I know it’s not soft in the ribcage. I’ll use my outside leg in front of the back cinch to hold that hip to the inside, and I’ll use my inside leg up by the front cinch to keep their ribcage soft, their hip up underneath and the front end reaching forward.”

Schafer says a horse shouldn’t be taken straight from a standstill into the drill. Instead, prepare the horse for the drill by making sure it is soft and ready to work.

Begin by loping a large, collected circle. The circle will be about half the size of the arena. Once the horse is balanced and soft, put them on a smaller circle.

The size of the small circle will depend on the horse and should be the smallest size the horse can lope while maintaining its correct lead. For a finished horse, the small circle will be the size of a barrel turn, whereas a 2-year-old or 3-year-old will need a much larger circle. Younger horses that are still gaining strength will often crossfire—swap leads in the hind end but not the front end—if the circle is too small. If the horse crossfires, break down to the trot and ask for the correct lead again, but this time make the circle bigger. As the horse gets more trained and becomes stronger, gradually make the small circle smaller.

Once the horse is loping the small circle, put your outside hand on the horn and put your body in the same position you’d take for the turn when making a run. Drive the horse forward with your legs on the small circle until you feel the horse’s inside hind leg come up underneath itself to reach and pull the body all the way through the turn.

While the horse may speed up on the small circle due to the increased drive and reach, Schafer advises not mistaking a fast circle that lacks drive and reach as the correct result.

Once you feel fluid, forward motion, lay your outside leg on the horse, square up your body to ask the horse to straighten up and drive out of the turn. Ride a straight line for a few strides, then stop and back up. 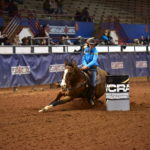 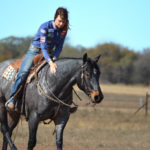