Jordon and Justin Briggs create a well-rounded and versatile horse by incorporating team roping into their program.

A shapely bay gelding with Justin Briggs aboard loped confidently on loose reins across the arena to a pen full of horned team roping cattle. The pair moved fluidly together, opening gates and shuffling into the herd effortlessly. Once among the roping steers, Justin carefully picked out two from the group and drove them through the gate into a smaller pen. From there, he sifted out a single steer and pushed it out the gate and into the arena. The horse never took a false step, nor spooked or lost confidence in the process. Clearly he’d done it for decades—except the horse is only 3.

With a 3-year-old so mature and confident, it’s easy to see how Jordon and Justin Briggs have become so successful in the arena. Employing the benefits of team roping into their program gives their horses the step up they need to be some of the best in the industry.

Rewards of Roping
Whether it’s a winning barrel racing futurity horse for Jordon or a solid head horse for Justin, the Briggses work together to create top-shelf horseflesh. All their horses are started the same and receive the same opportunities. Each horse on the property receives team roping training with live steers or a dummy used for practice.

There’s a variety of reasons why the Lott, Texas, couple chooses to call on the uses of another discipline when training barrel horses, but mainly the pair say it’s to keep the horse interested and relaxed in its job.

“Whether that’s just tracking steers in the arena or roping the dummy, Justin gets the same opportunity as me when starting them just to keep them really fresh,” Jordon said. “There’s two different times I ask Justin to rope on my horses. One is after I get them started on the barrel pattern and it gets a little monotonous and I don’t want them to get bored with barrel racing. Once they are starting to pick it up, I give them a break from the pattern for a little while and he starts roping on them.”

Keeping a horse’s mind fresh is important for both colts and older horses. The Briggses agree the change in disciplines helps break up the humdrum of constantly working on one specific task.

“Mainly, it’s just another job,” Justin said, adding that even his rope horses get the benefits of dual disciplines when Jordon starts them on the barrel pattern. “They don’t know what they are going to do from day to day—it might be barrels, poles or roping—so they don’t get nervous coming into the arena.”

Learning Rate with a Lead Steer
Typically, the Briggses start roping on their horses in their 3-year-old year after they’ve been introduced to the basics and started on the pattern. Roping provides a helpful boost in the training process, enabling the colts to advance more quickly than with barrel racing training alone. It helps reinforce the basics the couple teaches their horses from the beginning stages of training.

When starting 2-year-olds, the Briggses strive for their colts to know six foundational basics: travel on a loose rein, rate with rider body language, back up, follow their nose, have softness in a circle and break at the poll. All of these skills are used when team roping, and a steer adds incentive for the horse.

“For instance, the cow leaves so I engage my body; the cow slows down so I disengage my body,” Justin said. “It’s all the same stuff we do on our 2-year-olds, but now the cow’s drawing them and reinforcing my body language.”

One cornerstone of the Briggs’ training operation is collection on a loose rein. The Briggses require their horses know how to travel correctly on their own, which teaches them how to stand up and balance without rider contact on the reins. The horse learns to gain control of its shoulders and feet without being constantly held up by the bridle reins, keeping the horse soft, supple and responsive. Equally important in both team roping and barrel racing, a horse must understand and respond to body language when rating down on a loose rein.

“Roping gives them confidence on a loose rein to drive to a spot and then think about rate,” Jordon said. “Another time I ask Justin to rope on them is when I start stepping up their game, quickening everything up and adding some speed on the barrel pattern. If the run starts hitting them in the butt or they start to get a little hot, then he starts roping on them again just to be chasing after something that’s moving. They learn to rate a moving object and not just me running them at a stationary object and pulling on them.”

Translating to the Pattern
Although Jordon’s horses aren’t destined for the roping pen, she says roping helps with the patterning process and teaches a horse to work on its hind end.

“Following and rating to the lead steer gets them rocking back on their hip,” Jordon said. “That really helps me on the hind leg around a barrel for them to learn how to stick that hind leg.”

Jordon says when she’s running to a turn and a horse drops its shoulder, she corrects it by teaching it to gather its hip underneath itself at the turn and work off of its hind end around the turn. Roping helps reinforce this.

“If they are getting dumpy on the front end with me, then Justin will start dallying on them,” Jordon said. “It really teaches them to get off their front end and lean back on their butt, so when I run them to the turn and sit, they rock back instead of rock forward.”

When Justin teaches a horse to sit on its back end, he accomplishes this by roping the steer, dallying and then sitting down in his saddle to ask the horse to rate, slow down and stop. This helps the horse recognize the same body language Jordon uses when rating for a barrel turn. If a horse works on its front end when being dallied on, the small jerk from the steer will catch the horse off-balance and force it to get on its hind end instead.

Down the Road
Pulling a tire, both forward and backward, is another way Justin utilizes roping to help a horse engage its hindquarters, build muscle and progress through the seasoning process.

The commotion of team roping, pulling tires, swinging ropes and live cattle gets young horses used to a lot of activity, which helps Jordon’s colts to not be easily frightened by the loud noise and excitement when they’re hauled to competitions for the first time.

When Jordon pulls out of her drive to head to the next jackpot, futurity or rodeo, she’s confident in the mounts in her trailer because of the well-rounded and versatile training she and her husband have perfected with each horse. She knows her horses will have a strong foundation and be confident and excited about their jobs.

This article was originally published in the February 2018 issue of BHN. Article and photos by Kailey Sullins. 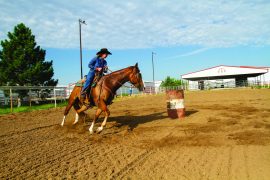