December 12, 2020 — Arlington, Texas — Hailey Kinsel first earned the coveted title of Women’s Professional Rodeo Association World Champion Barrel Racer in 2018, and now she can call herself a member of an even more elite group of women—those who have won three or more consecutive world championship titles. After winning her third-straight gold buckle in 2020, Kinsel joins the ranks of Billie McBride (1955-58), Jane Mayo (1959-61), Charmayne James (1984-93), and perhaps the most meaningful connection, Kristie Peterson (1996-98).

“Pretty cool, pretty good ranks I would say! The bloodlines connection is cool too,” Kinsel said of Peterson’s three-time world champion gelding French Flash Hawk (“Bozo”), a full brother to PC Frenchmans Hayday, who is the sire of Kinsel’s three-time world champion mare DM Sissy Hayday. “Kristie and Bozo was somebody everybody looked up to as a partnership—not just Bozo but her, and not just her but Bozo. It’s crazy, to be among someone like that.”

The unique edition of the 2020 Wrangler National Finals Rodeo at Globe Life Field in Arlington, Texas, proved lucrative for Kinsel, despite the new venue and many unknowns that came with moving the Finals to Texas.

“It was so awesome being in my home state, being able to have family and friends in the stands more so than out in Vegas,” Kinsel said. “A different venue, just to know that I can do it somewhere other than the Thomas and Mack is pretty cool, and my horse loved it.”

Kinsel and “Sister” absolutely dominated Globe Life Field. Kinsel won five go-rounds and placed in all but one—the only round she gave Sister the night off and opted for a horse change. She kept all 30 barrels up over 10 nights to win the first NFR average title of her career, doing so convincingly by four seconds for a $67,269.23 payday.

With total NFR earnings of $270,615.39, Kinsel easily clinched the RAM Top Gun Award for highest-earning competitor overall at the Finals. She finished the 2020 rodeo season on top of the world with $349,076.25 as 2020 WPRA World Champion Barrel Racer, 2020 Wrangler NFR Barrel Racing Average Champion and the new WPRA pro rodeo standard pattern record-holder of 16.56.

“It’s pretty far-fetched to wrap my mind around that. With the caliber of horses running here, I wouldn’t have picked that for anybody, honestly, in recent years to be able to do that. Sis clearly loves it here, and she’s adapted better than most. Obviously there’s been a lot that’s been close, but to pull out the round wins is a happenstance thing—she’s just doing it. I didn’t plan it, but it’s pretty fine with me,” Kinsel said with a laugh.

Sister continued displaying her uncanny ability to clock until the very end. The mare put up a 16.88 for second place in Round Ten with a run that Kinsel says even felt rough at times.

“She felt strong outside warming up more than usual, about like she did in Round Four, so I figured it’d be a similar feel. I was bottom of the ground, so I’d have to move her through it more,” Kinsel said. “At the first she felt a little pushy, so I knew I was going to have to work harder to get her by the second. She’s honest, she just knows now where [the barrels] are after making so many runs. We got by, but the goal was to be smooth and look at it like it’s Round One, starting over again, and not look at what’s at stake or anything. I’m surprised she clocked as great as she did. It felt rougher. On the backside of the second I lost some time and on the backside of the third I hung in my outside stirrup a little too long, but stuff like that she seems to make up in the straightaway.”

Kinsel noted multiple times during the week of the Finals that she’d let Sister rest if she felt the mare seemed the least bit tired. Sister continued to tell Kinsel otherwise.

“It’s really cool for me, because she’s been the constant thing that’s been perfect for me. No matter what else, no matter what rodeos got cancelled, no matter what in my personal life, just my whole journey, that’s the one horse that’s always sound, she’s always there, she’s always got her head hanging over the fence waiting for breakfast, she wants to get rode every day, wants to work, wanted to run tonight,” Kinsel said. “I said after last night I didn’t know if I was going to get on her, and I put her in the round pen this morning and she ran and bucked. So I was like, ‘Alright, you’re having fun, you can have one more.’ To get on a horse like that is awesome.”

Perhaps one of the most special moments of the night for Kinsel was choosing to take the victory lap aboard the mare who made dreams a reality for the lifelong barrel racer from Cotulla, Texas.

“That was the fastest, funnest victory lap of my life!” Kinsel exclaimed with a laugh. “I asked my mom [Leslie Kinsel] about it earlier. I knew I was going to be 14th out and maybe taking it, and Sis is funny like if she can get back in the arena afterward, she’s a little happier, and she was, she was quieter after I ran just from doing that. I wanted her to have more of a spotlight than she normally gets after a round win or after something like that. And for everyone to see too what a cool horse she is, to be able to do stuff like that on her.”

Stevi Hillman picked up her second-career round win in Round 10 of the 2020 Wrangler NFR aboard MCM Imasharpguy. Last year the duo picked up their first-career win in Round Nine of the Wrangler NFR at the Thomas and Mack Center Arena. This year they finished out the NFR in fashion when they turned in a 16.76 on the WPRA-approved standard pattern inside Globe Life Field in Arlington, Texas.

The arenas are drastically different, however “Sharpie” proved he can excel in both setups.

“Sharpie was super strong tonight,” Hillman said. “He’s been really good and felt better than ever this NFR and better than he has all year.”

Hillman started the Wrangler NFR on her RFD-TV’s The American champion Cuatro Fame (Dash Ta Fame x Princess Streaks x Streak Laico Bird) and picked up paychecks in five of the six rounds in which she ran “Truck.”

For Round Six, Hillman stepped on the Dunn Ranch-owned 8-year-old grey gelding and took home the third-place paycheck. She chose to get back on Truck in Round Seven and picked up a sixth-place check.

“It felt so good to get to run Truck at the NFR, and he won some good money,” Hillman said. “Hearing that it was a standard pattern, I was excited for both horses. We were expecting it to be a little more wide open on the third than it was, but we worked through the challenge and I feel blessed to win the money we did.”

Sharpie got the call for the last three rounds and hit barrels in Rounds Eight and Nine but pulled it together in Round Ten for the win.

“I carried my stinger whip my first run, and he gets dulled out to that so I put on my spurs instead and focused on my riding,” Hillman said.

Among her two mounts, Hillman earned $84,884.62 in total NFR earnings to move from eighth in the world standings to sixth.

“This was the best NFR yet,” Hillman said “I looked at [preparing for the NFR] different than some people. I felt like during the Fourth of July we run 10 runs on standard patterns back-to-back, so I treated it as a summer run. I was hoping to run Truck 10 rounds, but he did good and I wanted to get on Sharpie. We conditioned him as much as he let us condition him while keeping him sound, healthy and happy.” 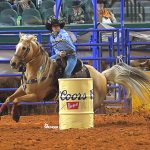 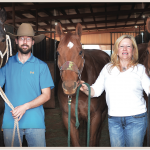