Andre Coelho became the first Brazilian to win an Equi-Stat top-25 futurity with his 5-State Breeders Championship in 2019 and continues to train winning barrel horses in the United States as resident trainer at Bill and Cheryl Kennedy’s Smoke Creek Quarter Horses.

Originally from Sao Paulo, Brazil, Andre Coelho learned to ride at a young age. His grandfather was a horse trainer, breaking mules and horses for trail riding. Coelho started out riding those horses until he saw barrel racing on TV.

“I thought, ‘Oh man, I want to do this.’ I started to work the pattern with my horse,” Coelho said. “I started with barrel horses when I was 13. I learned by myself. In 2008, I started to come to the United States to ride with the top futurity trainers I watched on YouTube. I started to come every year like twice a year. I rode with Latricia Duke, Dena Kirkpatrick, Danyelle Campbell, Kassie Mowry, Lance Graves, Pete Oen. Every year, I came to learn from those guys who were my heroes.”

Coelho says the Brazilian style of training barrel horses is much different.

“I don’t think that Brazilians are better or Americans are better. I think it’s so different in their styles,” Coelho noted. “One of the reasons I came to America is to learn the American style. I have so much to learn. That’s something I want to teach my kids—there is always something to learn.”

“He said, ‘There’s a lady who watches you on YouTube and wants to meet you. She likes your horses.’ He introduced me to her—it was Fallon Taylor. We talked a lot about horse training and drills,” Coelho said. “My wife told me, ‘Andre, I know you love this country. If that lady likes your horses and she won the world championship, maybe you can find some opportunity to work horses here.’ I said, ‘If I get the opportunity, you will come?’ She said, ‘I will,’ so I started to call all of my friends here, looking for an opportunity. One guy told me Bill Kennedy from Smoke Creek Quarter Horses needed a trainer.”

Coelho worked for Kennedy two years before returning to Brazil for the birth of his second child.

“My wife got pregnant and we decided to move back to Brazil,” said the father of two girls, ages 2 and 6. “My baby was born and I came back six months ago.”

Coelho’s been back at Smoke Creek Quarter Horses since April 2019. He says the biggest culture challenge is the language, and it’s tough being away from family.

“I struggle sometimes because people talk too fast,” Coelho said with a laugh. “To be far away from my family [is hard], but with all the technology like FaceTime, I talk to them every day.”

Coelho is grateful for the opportunities the Kennedys gave him.

This article was originally published in the September 2019 issue of Barrel Horse News. 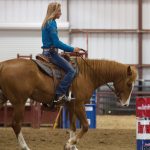 Tips for Selecting a Turnout Blanket