By an anonymous barrel racing husband.

We have all watched or heard about the “vine guy” and his videos about “how to feed like a barrel racer,” being a “barrel racer boyfriend,” and so on, that have plastered social media. For most people, these videos have brought tears of laughter and maybe helped lighten the mood of the craziness that follows the daily grind of this sport. For others, it was offensive that anyone joke about how seriously they take this sport. It may prompt a strange reaction from someone not familiar with barrel racing and make them really wonder about barrel racers.

So the age old question (almost as complex as which came first, the chicken or the egg?)… Are barrel racers crazy?

The short answer is yes, but just like the chicken and the egg, it is much more complex than a simple “yes” answer. Was the girl crazy before she got into barrel racing, or did barrel racing make her crazy?

If I ask my wife, I first get smacked, and then I’m asked who defines crazy? I truly believe most barrel racers must be crazy in order for them to “love” this lifestyle. I think the thing that most people don’t understand about barrel racers is that this isn’t a hobby, it’s a lifestyle.

When I was more naive to the sport and was still a barrel racer brother, I absolutely thought my sister was absolutely crazy. Who in their right mind would put that much effort into this? I mean, I was a calf roper and a team roper. This life was easy! I only had to ride when I went roping or 15 minutes before I was up at the rodeo. Injections? Eh… ol’ paint is tough, he don’t need that crap. Life as a roper was much less complicated. No bedding the horses in 12 inches of shavings – in addition to the stall mat and Soft Rides.  When we traveled, our horses were so tough they just stood tied to the trailer all night, or if they were really spoiled, they were put in the alley at the nearest run-down rodeo grounds that we could get into.

When I advanced to the level of barrel racer boyfriend, I had some major learning curves. I remember the first time I volunteered to feed for my now-wife when she went out of town. She only had three horses, how hard could it be? When she showed me how to feed, I pretended I was a pro at it. The first night I fed, I threw alfalfa and went to the trailer to grain. When I opened the back of trailer, it was like opening a cookbook in Spanish. Three horses, four bags of grain. Umm…. Did I miss something? Oh wait, the fat horse gets “lite feed.” Since when did Jenny Craig make her way to the equine world? When I started to add the supplements to the grain, I felt like a witch with her magic brew. A pinch of this, a dash of that, and ta-da, you have a winning horse potion.

Like a good boyfriend, I even offered to go support her at a barrel race, I never knew horses had to be loaded in a certain slot in the trailer or they wouldn’t run. Really? The horse knows? My horses would be spoiled to have dividers and not e stuck in the back of the trailer with the calves.

I wished I had learned at an early stage to not video well. Being an over-achiever and wanting to impress the beautiful girl I had landed, I made sure I was a professional videographer. Zooming in at each barrel, making sure I got the time on the end of the video, etc. If I had just videoed the dirt, I would have saved myself from the endless task of running to the fence to catch each run.

I think I missed the part in my vows where a barrel racer added so many extras. I guess that is the worse in “for better or worse.” I am pretty sure I never said “I do” to getting up an hour before my wife to give Lasix or bute so we are ready for the morning run. When we were first married, we were going to live the dream. We both rodeo and hit the road as weekend warriors.

I quickly learned my finished rope horse couldn’t sell for half the value of a green 2-year-old barrel prospect. The rope horses hit the road and stalls filled up with more and more prospects. I guess barrel racing is much different than roping. Every horse makes a rope horse. I never knew you have to have multiple prospects a year so you can make sure you have one that “wants it.” Since when did they get the choice? Oh wait, I forgot, the horse psychic told us that.

I adapted. Some tell me it may be Stockholm syndrome, but here I am. I am finally able to answer the question I first presented. I think the crazy aspect of the barrel racing trifecta comes from the addiction. They are like a cocaine addict looking for the next hit. I get texts at least a few times a week from my wife about a horse we should buy. Now that I am fully infiltrated, I of course don’t have much control, either. We get up early, ride all day, clean stalls, go to bed late, repeat. Our horses get shoes more often than we do. They have new blankets each year; I have a coat I won in the college rodeo days. The horses get bedding each night and clean stalls. I hired a housekeeper and my wife says we will just take another outside horse to pay for it and use that time to ride instead of clean. (Still don’t know how I fell for that one.) The horses get the best feed, supplements, and vet care. We cook if we get in from the barn on time; if not, it’s a quick snack before midnight for us. I have even had my vet x-ray my ankle after a horse fell on me so I could save money and avoid a doctor bill. I’m sure that money went for futurity payments or a new bit.

Crazy? Yes, I honestly could write a dissertation worthy of a Ph.D. on this subject. I sit at a futurity typing this out on my phone and laughing with friends as this started as a joke. I know it’s crazy, I know it’s costly. But it is amazing. When you raise a colt, do all the work, and see it win, it brings something out in a person. These barrel racers are crazy! Crazy about their dreams, crazy about their horses, and crazy enough to devote everything to something they love. 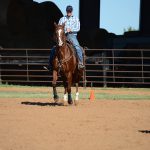 From Round Pen to Rodeo Ready, Part Two

Getting to Know Nellie Miller

Five Considerations for Your Horse When Facing Hay Shortages