A blue roan mare comes barreling down the long trek from the mouth of the gateway toward the timer’s line at the legendary Cheyenne Frontier Days—a start notorious for its difficulty. While most take a long walk out of the alley toward the line before sending their horse toward the first barrel, Nellie Miller’s two-time Cheyenne champion Rafter W Minnie Reba conquers the pattern in one fluid motion, making the task look easy.

“They need to rate without turning. That’s what’s so good about ‘Sister,’ it looks like she just puts a parachute out and throttles down, but she never turns into the barrel or turns too quick,” Nellie said. “That’s the ultimate goal, of course, to have every one work like her…working pretty much on her own.”

The four-time National Finals Rodeo qualifier and 2017 Women’s Professional Rodeo Association World Champion Barrel Racer says although the goal is clear, the process isn’t easy. Many years go into her training program, which all begins with her father, Sam Williams’, expert foundation.

Nellie and Sam are arguably the perfect father-daughter duo, training two NFR qualifiers—her 2010 NFR mount Rebas Smokey Joe (“Blue Duck”) and his world champion half-sister Rafter W Minnie Reba. Nellie says her father spends a lot of time on the horses before they ever reach her hands. She attributes most of her horses’ success to those early days with Sam.

“Usually my dad’s been on them for several years,” Nellie said. “By the time I get them and start running barrels, they are 5 or 6 years old. He spends a lot of time making them good, well-rounded horses. Even before we started barrel racing he always trained his horses around a barrel to train them to turn correctly and have that efficient turn.”

The cornerstone of Sam’s training regimen is the perfect circle. His goal is to have his horses using their bodies correctly in a perfect circle. This all begins within the first 30 days. Nellie says her father looks for four key things in those first 30 rides of a horse’s 2- or 3-year-old years—to give its head both directions, stop, back up in a straight line and walk, trot and lope a perfect circle.

“The circle is really important. You can do a perfect circle, but their bodies can be all out of whack doing it. You have to have the body in the correct position,” Nellie said. “My dad says he wants them turning in four-wheel drive with all four feet moving around the barrel in a circle. If all four feet are underneath them in the right position, it’s a really efficient turn.”

This four-wheel-drive style is continuously built on throughout the horse’s life. Generally, Sam turns his 3 year-olds out for several months to let them mature. He begins ranch work in their fourth year, where he continues to train the perfect circle. Even in the pasture when working cattle, Sam is always aware of where the horse’s feet are and how it is using its body. To keep the horse’s feet underneath itself, he rides on a loose rein and uses his legs to guide the horse and keep it from dropping in or swinging out. Keeping the same distance around the object is critical, whether it be a barrel, tree or group of cattle.

“Dad is pretty persistent. He will stop and correct one,” Nellie said. “If they are taught the right way in the first place, you have a better chance of them not crumbling under pressure.”

Sam’s foundation training, in addition to learning to handle pressure during ranch work, makes the transition to the pattern easy.

“By the time I get them, the pattern is not a huge thing,” Nellie said. “They seem to learn that pretty quickly. It’s the mechanics of the turn and the correct way of turning that is correct to us more than running the pattern.”

In a horse’s 5- or 6-year-old year, it is expected to start performing at some level. Nellie begins the patterning process, which consists mostly of learning how to rate correctly at a barrel.

Nellie teaches this both on and off the pattern. There are three cues she uses to signal rate—sit down, say ‘whoa,’ and then pull on the reins. Nellie notes although her horses know these cues because of her father’s foundation training, often when speed and pressure is added it causes them to become confused.

“When I start an inexperienced horse on the pattern, it’s a lot of speeding them up and then slowing them down,” Nellie said. “You speed them up until they fall apart a little bit, and then slow them back down.”

The back and forth of adding speed and then calming down after a horse becomes rattled is all a part of the process of seasoning a barrel horse. Nellie says teaching a horse to handle pressure while instilling confidence is what the training process is all about.

“They have to learn to handle that speed,” Nellie said. “I’ll speed them up, and they might get a little scared or not know how to handle it. They won’t know where to put their feet in the right spot going faster. You constantly have to push them so they do know how to do it, but at the same time if they do get rattled you have to bring them back down to earth and do what they are comfortable doing so that they can be confident.”

Nellie cautions against pushing the horse too hard, which could cause problems. She says knowing your individual horse is key in this scenario.

“You have to push them, but not just keep pushing them when they are having trouble,” Nellie said. “You have to bring them back to their foundation each time. I don’t like to just push and push and push until they are completely out of control.”

A drill she often uses with a horse that becomes frightened on the pattern is to move away from the pattern and work on adding speed and rating down before going back and working on those transitions on the pattern.

“I really struggled with my younger horse this year, because he’s really up and flight-y and his mind is not on me a lot of the time,” Nellie said. “With him, initially the more speed we added the more scared he got. I would [free-wheel] around the arena at a pretty good pace and work on rating him down. I worked on breaking his gait when I sat down. I wanted him to get used to that feeling of running and then get comfortable slowing down and turning. He eventually got used to those cues and started paying attention to what I was doing instead of getting scared.”

Ultimately, Nellie says the combination of her father’s foundation training, ranch work and her knowledge on the pattern is what makes their program work.

“We do quite a bit of [ranch work] to make them well-rounded,” Nellie said. “We might ride [out on the ranch among cattle] or in the arena, but either way they are going to have to perform and do a job. It gives them something to do so they don’t get tired of the same monotonous stuff all the time.”

With each horse, Nellie strives for the animal to learn how to handle its body correctly while taking the pressures of both ranch work and barrel racing. Her goal is for every horse to ride like her world champion Sister.

“I know girls who are a lot better at jockeying horses than I am, because I’ve always had horses that by the time I got them, they worked by themselves, which is our goal,” Nellie said. “It takes a long time to get them that way, but I don’t want to have to be pulling on them to slow them down, or rein them to turn them or think about where my hand needs to be. If I can ride quiet and correctly and not have to think about what the horse is going to do, because I know it’s going to work, then it makes for a pretty efficient run. In our opinion, they should know where to go and what to do. That’s the ultimate goal where we want our horses to end up.”

This article was originally published in the December 2019 issue of Barrel Horse News. 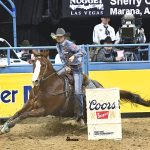